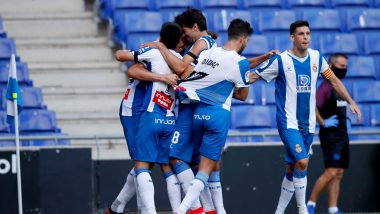 Espanyol vs Levante, La Liga 2019-20 Online Live Streaming and Live Telecast in IST: Espanyol will hope to extend their two-match unbeaten run when they face Levante in the La Liga 2019-20. Abelardo Fernandez’s side beat Espanyol 2-0 before holding the fifth-placed Getafe to a goalless draw in their last two league games igniting hopes of a possible survival in Spanish top-flight. Levante are placed 11th in the points table and have no relegation to worry about but will want a win after three successive draws. They are still winless in the league since football season resumed in Spain on June 11.

Levante’s last win in the league came against Real Madrid and since then they have lost to Eibar and played 1-1 draws against Granada, Valencia and Sevilla. Levante will be without Ruben Rochina due to suspension but will have forward Roger Marti back into the starting XI after completing his own suspension. Espanyol will be without Bernardo Espinosa with the defender banned for two matches after picking up a red card against Getafe.

How to Watch Live Telecast of Espanyol vs Levante, La Liga 2019-20 Football Match?

Unfortunately, there will be no live telecast for Espanyol vs Levante match in India as there are no official broadcasters available for La Liga 2019-20 in the country.

Where to Get Free Live Streaming Online of Espanyol vs Levante, La Liga 2019-20 Football Match?

Fans can, however, can live-action on online platforms. To watch the live streaming of Espanyol vs Levante La Liga match, fans need to visit the official Facebook page of La Liga and watch the match live there.

(The above story first appeared on LatestLY on Jun 20, 2020 03:03 PM IST. For more news and updates on politics, world, sports, entertainment and lifestyle, log on to our website latestly.com).