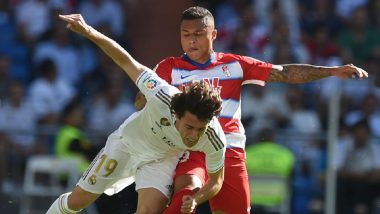 Granada vs Real Madrid, La Liga 2019-20 Live Streaming Online: Real Madrid face Granada in an away tie looking to go four clear of arch rivals Barcelona, who have started to show some fight towards the closing stages of the campaign. The Los Blancos have been in sublime form heading into the contest, winning all their games since the league’s resumption. Zinedine Zidane has rotated his team well in a packed schedule where there is a game almost every third day. With a win tonight and just two games remaining in the season, the title could very well be unofficially over. Lionel Messi Is Just Behind Cristiano Ronaldo, Piers Morgan Jumps Into GOAT Debate.

Granada have a lengthy injury list heading into the clash with Real Madrid as key players like Maxime Gonalons, Quini and Alex Martinez all miss out. Alvaro Vadillo and Jesus Vallejo will undergo late fitness test to determine their availability for the match. Roberto Soldado is an experienced striker in their ranks while Carlos Fernandez has chipped in with goals from the flanks. Yangel Herrera and Ramon Azeez will not venture forward with protecting the back for their primary responsibility.

Skipper Sergio Ramos and full-back Dani Carvajal return to the Real Madrid starting line up after serving their one game suspension. The presence of Sergio Ramos brings a calming influence on the team which is vital in such season defining games. Eden Hazard should get the nod to start alongside Karim Benzema and Rodrygo in the Los Blancos forward line. Luka Modric has been instrumental in the dominance displayed by his team in midfield and the Croatian should start with Toni Kroos and Casemiro helping him out. GRD vs RM Dream11 Prediction in La Liga 2019–20: Tips to Pick Best Team for Granada vs Real Madrid Football Match.

Granada vs Real Madrid match in La Liga 2019-20 will take place on July 14, 2020 (Monday mid-night). The match will be played at the Los Carmenes Stadium in Granada. The game is scheduled to start at 11:00 pm IST (Indian Standard Time).

Where to Get Live Telecast of Granada vs Real Madrid, La Liga 2019-20 Football Match?

Fans cannot live telecast the Granada vs Real Madrid match on their television sets in India and there are no official broadcasters for La Liga in the country. But fans can always follow the live-action online.

How to Get Free Live Streaming of Granada vs Real Madrid, La Liga 2019-20 Football Match?

Fans can follow the live streaming of Granada vs Real Madrid game on the official Facebook page of La Liga, which has been live streaming all the matches for their fans worldwide. Real Madrid have defeated Granada in their last nine games and it will be huge surprise if they fluff their lines in such a critical fixture. Expect Karim Benzema to play a key role in this win for the Los Blancos.

(The above story first appeared on LatestLY on Jul 13, 2020 04:15 PM IST. For more news and updates on politics, world, sports, entertainment and lifestyle, log on to our website latestly.com).