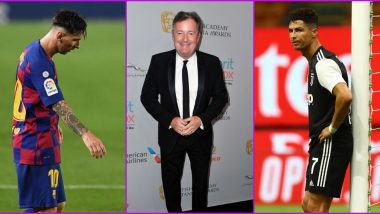 British journalist and media figure Piers Morgan has jumped into the Cristiano Ronaldo vs Lionel Messi debate. There seems to be no end to this hot debate as both continue to win hearts with their superb performances. The football world probably seems divided into equal halves when it comes to picking GOAT between Ronaldo and Messi. Meanwhile, Piers has listed out some factors, which, according to him, make Ronaldo, a better player than Messi. The TV presenter also did not shy away from saying that he is a Ronaldo fan. Cristiano Ronaldo vs Lionel Messi: Brazilian Legends Ronaldinho and Ronaldo Nazario Settle the GOAT Debate.

“I think he is the best player to have ever played the game. Wet Wednesday in Bolton and you need a goal to save your life – I would put money on Cristiano. We’ve become quite good friends. We text each other most weeks.

“He’s got this ferocious competitive spirit, the like of which I have rarely encountered. He’s 35, Lionel Messi is just behind him and for 16 years we have had these two guys at the peak of their powers. I am a Ronaldo man, I often have an argument with Gary Lineker. The two of them are the stand-out players ever. He’s a Messi fanboy. I am a Ronaldo fanboy,” Piers added.

Piers while explaining what makes Ronaldo better said that Messi has not challenged himself and has been with just Barcelona. He compared Messi’s journey to that of Ronaldo. Cristiano Ronaldo Is a Champion With His Feet and Mind, Says Juventus Manager Maurizio Sarri.

“Look, Messi; he’s been at one club, he’s never done it on the international stage, his record in the Champions League is nowhere near as good as Ronaldo’s in the closing stages in terms of goals scored… Ronaldo has done it on the international stage, the Champions League and brilliant in four different countries – Portugal, England, Spain and now Italy.

“Ronaldo has challenged himself more, succeeding in every league. Messi has never risked it, he has never left Barcelona. There is something to be said for one club players, like Paolo Maldini, I don’t want to denigrate Messi, but it’s Ronaldo for me,” Piers added.

(The above story first appeared on LatestLY on Jul 13, 2020 02:25 PM IST. For more news and updates on politics, world, sports, entertainment and lifestyle, log on to our website latestly.com).