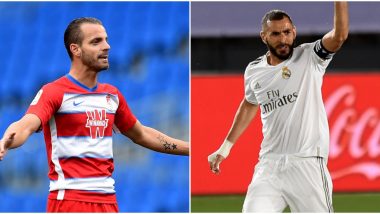 Real Madrid will hope to take one more step closer to the league title when they face Granada in La Liga 2019-20 on Monday. Zinedine Zidane’s men are just two wins away from clinching their first La Liga title since 2017. They are on an eight-match winning streak and need to win only two of their remaining three games to lift the league trophy. They face Granada, who are unbeaten in their last three league games and are playing for a European spot this season. Meanwhile, fans searching for all tips and team suggestions to pick the best team for Granada vs Real Madrid match in La Liga should scroll down for all information. Fans go Berserk With Possibility of Real Madrid vs Juventus in the Champions League 2019-20, Netizens Express Their Excitement on Social Media.

Granda have won two of their last three games and have lost just twice in their last eight since La Liga 2019-20 resumed last month. In that period, they have drawn and won three each and lost to Villarreal and Eibar. Diego Martinez’s side are placed 10th in the standings and are only three points behind the final six. Real are atop of league table and are a point clear of Barcelona with also a game in hand.

Captain Sergio Ramos and right-back Dani Carvajal will return to the Madrid starting XI after serving their one-game suspension while Eden Hazard is expected to start after coming off the bench against Alaves. Defenders Marcelo and Nacho are out for a long period due to injuries. For Granada, Maxime Gonalons, Alex Martinez, Quini and Neydor Lozano are still unavailable with injuries but Alvaro Vadillo could make the cut if he recovers from a stomach upset.

Granada vs Real Madrid, La Liga 2019-20, Dream11 Team Prediction: Defenders – Sergio Ramos (RM) is a must pick for the defender’s role. He has scored five times in last seven matches. Victor Diaz (GRD) and Domingos Duarte (GRD) can be picked as the other two defenders.

Real Madrid striker Karim Benzema (RM) should be made the first-choice captain for this fantasy team while his teammate Sergio Ramos (RM) or Granada’s Darwin Machis (GRD) should be made the vice-captain. All three players have been among goals in recent times and are in excellent form.

(The above story first appeared on LatestLY on Jul 13, 2020 03:04 PM IST. For more news and updates on politics, world, sports, entertainment and lifestyle, log on to our website latestly.com).