Chelsea vs Leicester City match in FA Cup 2020–21 final will be played at the Wembley Stadium and will take place on May 15, 2021 (Saturday). The match has a scheduled time of 09:45 pm IST (Indian Standard Time). 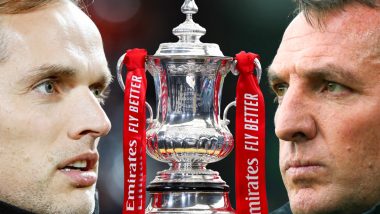 Leicester City, not doubt, will be eyeing their maiden FA Cup trophy as the Foxes feature in their first FA Cup final since 1969. Chelsea, on the other hand, will be hoping to lift the trophy this time after having lost the finals to Arsenal last season.

Fans in India can follow live action of the FA Cup 2020–21 final on Sony Sports channels. Sony Pictures Sports Network (SPSN) is the official broadcaster for Serie A 2020-21 in India. Fans can catch the live telecast of Chelsea vs Leicester City on Sony Ten 2 and Sony Ten 2 HD channels. The match will also be live on Sony’s online live streaming platform SonyLiv.

(The above story first appeared on LatestLY on May 15, 2021 09:23 PM IST. For more news and updates on politics, world, sports, entertainment and lifestyle, log on to our website latestly.com).