Hyderabad FC vs Jamshedpur FC match in ISL 2020-21 will take place on December 2 (Tuesday). The match will be played at the Tilak Maidan in Vasco da Gama, Goa and it is scheduled to start at 07:30 pm IST (Indian Standard Time). 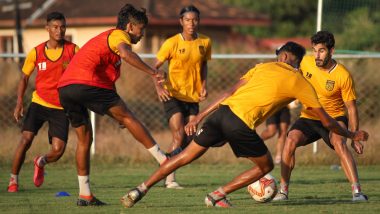 Hyderabad FC have made a strong start to the 2020/21 Indian Super League season with 4 points from 2 games. It is not just the positive results that has impressed their fans, it is their game play and defence in particular which has been making waves. After the debacle of last season, Hyderabad roped in manager Manuel Roca and he has certainly improved the players. Next up for them is Jamshedpur FC, who have just a solitary point from 2 games. Although it is still early days in the tournament, momentum always plays a key role here and both these clubs seem to be at opposite ends of the spectrum currently. HFC vs JFC Dream11 Team Prediction in ISL 2020–21: Tips to Pick Goalkeeper, Defenders, Midfielders and Forwards for Hyderabad FC vs Jamshedpur FC in Indian Super League 7 Football Match.

Hyderabad head into the game without the availability of two key players – Luis Sastre who is out with a hamstring injury and Joel Chianese, out with an ankle issue. Fran Sandaza will undergo a late fitness test to determine his availability. These injuries have dampened Hyderabad’s mood ahead of the contest with their bench being relatively inexperienced. Aridane Santana though will be a massive presence in the attacking third with the Spanish striker in good goalscoring form.

Jamshedpur have goalkeeper Rehenesh TP suspended for the game following his dismissal in the previous match. Pawan Kumar could start between the posts in order to replace the suspended custodian. The likes of Nerijus Valskis and David Grande are key players for the team in attack while the onus will be on Peter Hartley to hold fort in defence. Narender Gehlot had a decent campaign last season and will be looking for much of the same this term in the backline. ISL 2020–21 Match Preview: Jamshedpur FC Look for First Win When They Play Against Hyderabad FC at Tilak Maidan Stadium.

Hyderabad FC vs Jamshedpur FC match in ISL 2020-21 will take place on December 2 (Tuesday). The match will be played at the Tilak Maidan in Vasco da Gama, Goa and it is scheduled to start at 07:30 pm IST (Indian Standard Time).

Those unable to follow the Hyderabad FC vs Jamshedpur FC match on television can also follow the game online. Disney+Hotstar, the OTT of Star Network, will be live streaming the HFC vs JFC online for its fans in India. JIO subscribers can also follow the match live on JIO TV. The two sides could cancel each other out at the end of 90 minutes with 1-1 being the most probable result.

(The above story first appeared on LatestLY on Dec 02, 2020 03:17 PM IST. For more news and updates on politics, world, sports, entertainment and lifestyle, log on to our website latestly.com).