Jamshedpur FC broke their run of four successive draws in the Indian Super League (ISL) with a stunning 4-1 demolition of FC Goa at the JRD Tata Sports Complex here on Thursday. 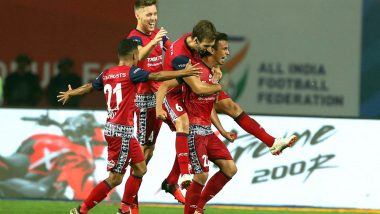 Jamshedpur, Nov 2: Jamshedpur FC broke their run of four successive draws in the Indian Super League (ISL) with a stunning 4-1 demolition of FC Goa at the JRD Tata Sports Complex here on Thursday. Michael Soosairaj's brace (17th minute and 50th) along with goals from Memo (77th) and Sumeet Passi (78th) saw Jamshedpur hand Goa their first defeat in the league and climb to the third spot on the table.

Mourtada Fall's 33rd-minute equaliser for the Gaurs went in vain as Goa's defence was found wanting. Having lost the prolific striker Ferran Corominas to a suspension, Sergio Lobera started with Miguel Palanca up top, while Cesar Ferrando made five changes to his Jamshedpur starting XI from the 2-2 draw with Kerala Blasters. You can watch Jamshedpur FC vs FC Goa Match Video Highlights here.

The hosts were lightning quick off the blocks with young Gaurav Mukhi forcing Mohammad Nawaz into an excellent save as early as the second minute. The young Goa custodian made an even better one a minute later from Sergio Cidoncha's well-struck free-kick.

The hosts' early pressure paid off in the 17th minute with Soosairaj calmly slotting the ball into the net after Goa failed to clear a Cidoncha corner.  Indian Super League 2018–19 Schedule in PDF for Free Download: List of Full Football Match Timetable, Date, Venue & Time of ISL 5.

Goa failed to threaten a dominant Jamshedpur until the 26th minute when Hugo Boumous struck the woodwork with a fierce low shot. A few minutes later, the visitors equalised against the run of play through Fall's header after Edu Bedia had flicked on a Boumous free-kick.

The hosts should have gone into the break with their noses in front but Memo blasted his shot high and wide after he had peeled away at the far post from a Cidoncha free-kick.

Ferrando's men did have their deserved lead four minutes into the second half with Soosairaj bagging his second. The 24-year-old made no mistake after he was released behind the Goa defence by Cidoncha following a quick breakaway. ISL 2018-19 Points Table & Team Standings: Bengaluru FC Secure 2-1 Win Over ATK .

A horrible Lenny Rodrigues back pass almost gifted the hosts another goal before Tiri came close with a header. At the other end, Bedia threatened with a couple of long-distance attempts with the hosts remaining in the ascendancy.

A belter of a Memo strike from just outside the box after Goa failed to deal with a corner in the 77th minute sealed three points for Ferrando's men. Passi added gloss to the scoreline just a minute later after he tapped into an empty net following a layoff from fellow substitute Carlos Calvo.

(The above story first appeared on LatestLY on Nov 02, 2018 09:12 AM IST. For more news and updates on politics, world, sports, entertainment and lifestyle, log on to our website latestly.com).