The Euro 2020 champions were stunned by North Macedonia courtesy of a late goal as they were denied a chance to play in the FIFA World Cup 2022 later this year. Italy had failed to qualify for the 2018 edition of the FIFA World Cup in Russia earlier. 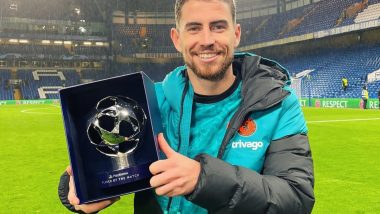 History has seemed to repeat itself for a second consecutive time, Italy would not be playing the World Cup. The Euro 2020 champions were one of the favourites to make it through to Qatar but a shocking 1-0 loss at the hands of North Macedonia has now ended their hopes of returning back to the World Cup. Expectedly, head coach Roberto Mancini was not a happy man as he said after the match, "Just as the Euros was the most wonderful experience of my life, this was the biggest disappointment. We can say nothing, that is football, sometimes incredible things happen and it happened. We shouldn’t have been here in the first place, but we did everything we could to win and it’s hard to even talk about it." Italy 0–1 North Macedonia, FIFA World Cup 2022 Qualifiers, Video Highlights

Italy had been on a 37-match unbeaten streak as they won the Euro 2020 title last year in a dramatic final against England. But the Azzurri failed to make it to the World Cup, first from the qualifiers and then, from the playoffs.

Jorginho blamed himself for Italy not making it through to Qatar, remembering his missed penalties during the group stage games of the World Cup qualifiers. The Chelsea midfielder had missed penalties against Switzerland and last year. Had those goals been scored, Italy would not have had to compete in the playoffs as they would have made it to the World Cup.

Saying that these mistakes would haunt him for the rest of his life, Jorginho stated, "We played good football, we won the European Championship last summer, but unfortunately in the last few games we made small errors and were unable to recover from them. They made the difference."

"It hurts when I think about it because I do still think about it and it will haunt me for the rest of my life. Stepping up there twice and not being able to help your team and your country is something that I will carry with me forever, and it weighs on me. People say we need to lift our heads and carry on, but it's tough," he added, as quoted by RAI Sport.

It was Aleksandar Trajkovski's injury-time strike that ended Italy's chances of qualifying for the World Cup but senior defender Giorgio Chiellini brushed aside reports of his team being complacent. Chiellini, as quoted by Tuttosport, said, "We weren't presumptuous. We made mistakes from September until today and we paid them. I am proud of this team, it is obvious that we are disappointed and destroyed."

"We have to start again. A large void is now within us and we hope it can give us the strength to go forward in future. I hope it will still be with this coach, who has given so much to the Nazionale," he added. Italy next face Turkey on March 30.

(The above story first appeared on LatestLY on Mar 25, 2022 11:06 AM IST. For more news and updates on politics, world, sports, entertainment and lifestyle, log on to our website latestly.com).