Italy vs Wales, UEFA Euro 2020 Live Streaming Online & Match Time in IST: How to Get Live Telecast of ITA vs WAL on TV & Free Football Score Updates in India

Italy have been in good form in this tournament, winning both their Group A matches in dominant fashion and they would be the favourites, heading into this game. Wales, on the other hand, have bounced back to form with Gareth Bale playing an instrumental role in their 2-0 win over Turkey in the last match. 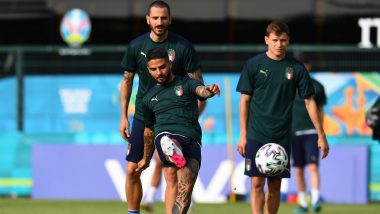 On a high after winning their first two matches, Italy would be the favourites to make it three in a row when they face Wales in a Group A encounter in Euro 2020 on Sunday, June 20. The match would be played at the Stadio Olimpico in Rome and is scheduled to start at 09:30 PM IST (Indian Standard Time). Italy have been in red hot form and have already shown why they are one of the favourites to win the European title this season. They defeated Turkey 3-0 in their first match of the campaign and repeated that same scoreline in their second fixture against Switzerland just three days ago. Roberto Mancini has a serious mix of talent and experience in his side as the Azzurri would be raring to head into the knockout stages with a clean slate. Euro 2020 Day 10 Schedule: Today's Match With Kick-Off Time in IST, Upcoming Fixtures and Updated Points Table

Wales on the other hand, bounced back with a win against Turkey in their last match after playing out a 1-1 draw against Switzerland in their opening encounter. They would particularly be happy with Gareth Bale's form, who set up both the goals in their victory over Turkey. They would expect the Real Madrid attacker to once again step up and show why he is still one of the best wingers in European football.

When is Italy vs Wales, UEFA EURO 2020 Match? Date, Time and Venue Details

Sony Pictures Networks India is the official broadcaster of UEFA EURO 2020 in India. It will broadcast Italy vs Wales, live match on Sony Ten 2 in English, Sony Ten 3 in Hindi, Sony Ten 4 in Tamil and Telugu, Sony Six in Bengali and Malayalam.

(The above story first appeared on LatestLY on Jun 20, 2021 02:36 PM IST. For more news and updates on politics, world, sports, entertainment and lifestyle, log on to our website latestly.com).