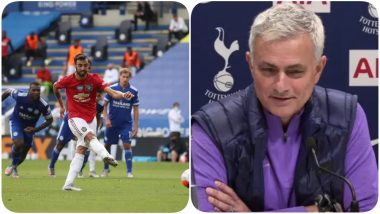 Jose Mourinho has taken a swipe at Bruno Fernandes in his recent interview. The Tottenham Hotspur manager has said commented about the number of penalties the Manchester United striker has taken since the start of the season. Bruno Fernandes made a transfer from Sporting Lisbon earlier this year and has been in a great form ever since. The 25-year-old scored eight goals and assisted seven times in his 14 Premier League appearances - with four of his goals coming from the penalty spot. This did not go unnoticed by the Tottenham Hotspurs' manager and he was quick enough to point the same during an interview. Bruno Fernandes Equals Cristiano Ronaldo’s this Prolific Record With Latest Premier League Player of the Month Award.

Jose Mourinho said, “Bruno came in, was fit, played very well, improved the United team and also proved to be a great penalty taker, one of the best in the world because he had about 20 to score." The Red Devils who qualified for the Champions League 2019-20, earned 14 spot-kicks this season, whereas the Hotspurs have earned 11 penalties. Out of the 14 spot-kicks earned by the Red Devils, 10 of them had been converted into goals. Out of the 10 goals, six have them have been netted by Bruno Fernandes. The new recruit has had an amazing start at the Old Trafford as he has scored 10 goals and eight assists so far in the season.

He was even awarded as Premier League Player of the Month for two back to back months and he soon equalled the record with Cristiano Ronaldo. Bruno will soon be seen in action during the Champions League 2019-20.

(The above story first appeared on LatestLY on Jul 31, 2020 06:07 PM IST. For more news and updates on politics, world, sports, entertainment and lifestyle, log on to our website latestly.com).