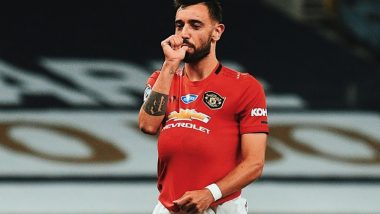 New signing Bruno Fernandes is having a ball of a time at Manchester United. The midfielder has been in a terrific for and even Paul Pogba has praised the youngster for lifting up the team. Fernandes has picked up the Premier League Player of the Month Award award for his performance in June 2020 and has equalled the record of his idol, Cristiano Ronaldo, as he picked up the award for two consecutive months when he still played for Manchester United. The midfielder had picked up the award in February and then we had the football schedules going for a toss due to the outspread of the coronavirus. Bruno Fernandes Mimics Cristiano Ronaldo’s Iconic ‘Sii’ Goal Celebration During Shooting Drill With Manchester United Teammate Diogo Dalot (Watch Video).

Now, after his brace against Brighton, he picked up the award. Ronaldo had picked up the Premier League Player of the Month Award in November and December of the 2006-07 season. Mohamed Salah who plays for Liverpool had achieved this feat for the Reds when he scored eight goals in seven games for Liverpool over March and April 2018. Talking about Manchester United, the team has made it to the top five slots of the EPL 2019-20.

Give us some adjectives to describe @B_Fernandes8 because we're running out 😅👇 pic.twitter.com/hSHV0dxZOq

The Red Devils last faced Aston Villa and Bruno Fernandes kept up his dream run by converting a penalty into a goal. The team is placed on number five with 58 points in their kitty and is just one run away from sealing the number four position.

(The above story first appeared on LatestLY on Jul 11, 2020 07:53 PM IST. For more news and updates on politics, world, sports, entertainment and lifestyle, log on to our website latestly.com).