Juventus Announces 22-Member Squad for Their Match Against Lyon in the Champions League 2019-20, Sam Khedira Out 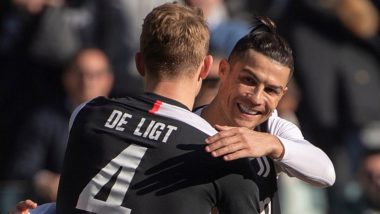 After picking up their ninth Serie A 2019-20 title, Juventus get back to business. Party time is over for the Bianconeri and now it’s time for serious stuff. Juventus will play against Lyon in the second leg of the Champions League 2019-20 which was supposed to happen earlier this year. But due to the outbreak of the coronavirus, the tournament was adjusted to August 2020. Ahead of the match, the Bianconer has declared 22-member squad for the upcoming Champions League matches. Juventus will play against Lyon in the Round of 16 on August 8 2020 and ahead of the tie, Sami Khedira had been ousted from the squad. 2019-20 UEFA Champions League Round of 16 Draw: Who Could Juventus, Liverpool & Other Top Teams Face in Knockouts?

Merih Demiral has been included in the 22-member list which will play the second leg of the game. The two teams met in February 2020 in a reverse fixture and the team won hosts Lyon back then had won the game 1-0 and are leading. The squad for the Champions League was announced on the website of the Old Lady. The team has a couple of goalkeeper Gianluigi Buffon and Wojciech Szczęsny. You can check the list of players below:

All eyes will be on Cristiano Ronaldo and Paulo Dybala as they were rested for the final game of the Serie A 2019-20 keeping in mind the vigorous schedules of the Champions League 2019-20. The two had been around for the celebrations of the Serie A.

(The above story first appeared on LatestLY on Aug 04, 2020 03:53 PM IST. For more news and updates on politics, world, sports, entertainment and lifestyle, log on to our website latestly.com).