Alvaro Morata and Paulo Dybala will undergo late fitness tests to determine their availability for the game. Moise Kean and Federico Chiesa are likely to lead the attacking line for the hosts with Manuel Locatelli and Rodrigo Bentancur slotting in midfield. 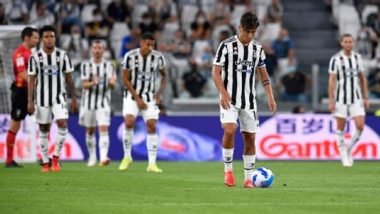 It is a blockbuster clash in the Italian Serie A with Juventus and AS Roma clashing at the Allianz Arena in Turin. The Bianconeri have not had the best starts to the season under Massimiliano Allegri as they languish at 7th place in the points table. There have been signs of a revival though with Juventus winning their last three matches on the bounce. Opponents AS Roma have begun their campaign on a positive note and a win tonight would see them close the gap with leaders AC Milan to four points. Boss Jose Mourinho has had his fair share of ferocious moments with Juventus fans in the past and the Roma boss will be looking forward to renewing this rivalry. Manuel Locatelli Scores Late Goal To Help Bianconeri Register Third League Win of Season.

Alvaro Morata and Paulo Dybala will undergo late fitness tests to determine their availability for the game. Moise Kean and Federico Chiesa are likely to lead the attacking line for the hosts with Manuel Locatelli and Rodrigo Bentancur slotting in midfield. Juan Cuadrado and Federico Bernardeschi on the wings could stretch AS Roma with their pace and trickery. Matthijs de Light and Leonardo Bonucci are likely to be the center-back pairing for Juventus in absence of Giorgio Chiellini. Federico Chiesa Leads Juventus to 1-0 Win Over Chelsea in UCL 2021-22 Match.

Bryan Cristante and Jordan Veretout are set to be the midfield pair for AS Roma with playmaker Lorenzo Pellegrini playing ahead of the duo. Nicolo Zaniolo is settling in well after a few nightmare seasons with injuries. The absence of Tammy Abraham is a huge blow for AS Roma will the young forward suffering an ankle injury while on international friendly with England.

When is Juventus vs AS Roma, Serie A 2021-22 Football Match? Know Date, Time, Venue Details

Juventus vs AS Roma match in Serie A 2021-22 will be played at the Allianz (Juventus) Stadium in Turin. The game will be held on October 18, 2021 (Monday) and the match is scheduled to begin at 12:15 am IST (Indian Standard Time).

Where to Get Live Telecast of Juventus vs AS Roma, Serie A 2021-22 Football Match?

Fans in India can watch the Juventus vs AS Roma match live on Viacom18 channels as they are the official broadcaster for the Serie A 2021-22 in India and are likely to telecast the game.

How to Get Free Live Streaming of Juventus vs AS Roma, Serie A 2021-22 Football Match?

Juventus playing at home have a slight edge in this game but Jose Mourinho’s team are known for its defensive solidity and the match could well end in a draw.

(The above story first appeared on LatestLY on Oct 17, 2021 02:56 PM IST. For more news and updates on politics, world, sports, entertainment and lifestyle, log on to our website latestly.com).