Juventus vs Atalanta, Serie A 2019-20: Cristiano Ronaldo, Paulo Dybala and Other Players to Watch Out in JUV vs ATN Football Match

Maurizio Sarri will look for a response from his team as he knows that anything other than all three points could open the title race wide open once again. Atalanta are unbeaten since the football’s restart, a run which includes victories over Italian heavyweights Lazio and Napoli. 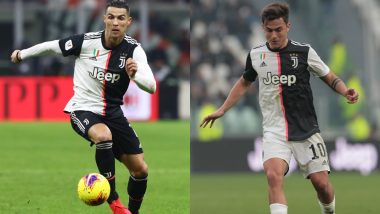 Juventus will begin their quest for a ninth successive domestic league title when they welcome third-placed Atalanta. The clash will be played at the Allianz Stadium on July 11, 2020 (late Saturday night). The visitors have all but guaranteed their UCL qualification but will look to get one over the league leaders as a win will see them move within six points of the record champions and give them an outside chance of winning the league. Juventus vs Atalanta, Serie A 2019-20: Check Out Predicted Line-Ups for JUV vs ATN at Allianz Stadium.

Juventus’ perfect record post lockdown was ended by AC Milan in the last fixture as the Zlatan Ibrahimovic-led Rossoneri side defeated the Old Lady 4-2, after recovering from a two-goal deficit. Maurizio Sarri will look for a response from his team as he knows that anything other than all three points could open the title race wide open once again. Juventus vs Atalanta, Serie A 2019–20 Free Live Streaming Online & Match in Indian Time.

Atalanta are unbeaten since the football’s restart, a run which includes victories over Italian heavyweights Lazio and Napoli. So the Bergamo side come into this game in great form and will be hopeful of upsetting yet another heavyweight in their astonishing pursuit of a league title.

So ahead of this huge clash at the top of the table, we take a look at some players who could prove to be match-winners for their team.

The Portuguese forward has been sensational in his second season in Italian football and has registers 26 goals in the league this season. He has been involved in almost every Juventus goal post lockdown and will be eager to continue that run. The 35-year-old is three goals behind in the top scorer’s race and that will motivate him even further in this game.

The Slovenian has been one of the main reasons behind Atalanta’s title charge this season in the Italian league. The 32-year-old has been involved in 23 goals in Serie A, scoring 15. The forward will be the biggest threat for Juventus in the final third as he is capable of finding the back of the net as well as a team-mate.

The Argentine was left out in the game against Milan and his presence was clearly felt by Juventus who struggled to create chances in the second half. Dybala is back in the squad for this game and is expected to feature from the start as his creativity will be important to carve out the Atalanta defence.

The Argentine is the main creative outlet of Atalanta and will be looking to show his qualities against the record champions. The 32-year-old has recorded 15 assisters this season along with six goals. His partnership with Ilicic has proved pivotal for the Bergamo side this season and will play a crucial role in this game as well.

(The above story first appeared on LatestLY on Jul 11, 2020 08:31 PM IST. For more news and updates on politics, world, sports, entertainment and lifestyle, log on to our website latestly.com).