Juventus vs Udinese, Coppa Italia 2019-20 Free Live Streaming Online: How to Watch Live Telecast of Football Match on TV As per IST? 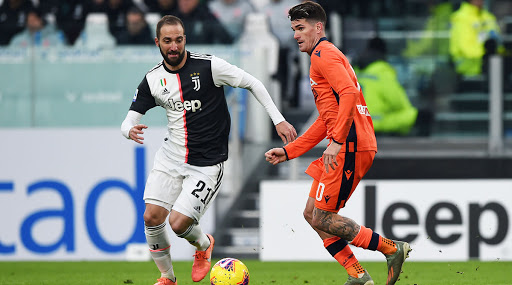 Juventus will take on Udinese in a Round of 16 match of the Coppa Italian 2019-20 season. The match will be played at the Juventus Stadium on January 15, 2020 (late Wednesday night). The reigning Italian champions will be full of confidence while entering into this match after a 2-1 win over Roma on the weekend. The Bianconeri were knocked out of quarterfinals by Atalanta last season so they will be eager to make it right this time around. Meanwhile, fans searching for Juventus vs Udinese Coppa Italia live streaming details can scroll down below for more details. Cristiano Ronaldo, Paulo Dybala and Sami Khedira Send Good Wishes to Injured Teammate Merih Demiral (Read Posts).

Juve have a few injury concerns as veteran defender Georgio Chiellini and German midfielder Sami Khedira are recovering from injuries. Meanwhile, Turkey international Merih Demural was injured in the game against Roma so former Ajax captain Mattijs de Ligt is expected to start alongside Daniel Rugani. Udinese manager Luca Gotti has an almost fully fit squad to choose from as only Brazilian defender Samie Santos is out with an injury. Rodrigo De Paul will be the main threat from the visitors and need him to be at his best if they are to advance to the further rounds. Cristiano Ronaldo Displays Crazy Football Skills Against Chris Smalling During Roma vs Juventus, Serie A 2019-20 (Watch Video).

Sadly, no TV channel will provide telecast of the Juventus vs Udinese clash in the round of 16 of Coppa Italiana 2019-20 in India.

As no channel is providing the telecast of Juventus vs Udinese clash in the round of 16 of Coppa Italiana 2019-20, official streaming of the game will be unavailable. But fans can still follow the official social media websites of the teams to get the live details.

Both sides had a disappointing Coppa Italia last season as Juventus were knocked out in the quarter-finals by Atalanta while Udinese suffered a shock defeat in the third round against Serie B side Benevento.