The young Englishman is set to become Manchester City's second signing of the summer transfer window after they roped in Erling Haaland from Borussia Dortmund. The Premier League champions are also said to have interest in signing Marc Cucurella from Brighton. 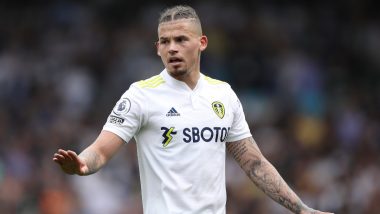 Manchester City have agreed on a deal to sign Kalvin Phillips from Leeds United. According to a report in The Athletic, City are set to pay a fee of £42m with bonuses of £3m. The Englishman has been on the radar for the defending champions, who are now set to complete their second signing after bringing in Erling Haaland from Borussia Dortmund. The young defensive midfielder is set to be Fernandinho's replacement at Manchester City after the Brazilian's departure from the club. Frenkie de Jong Transfer News: Manchester United Reportedly Closing In on Dutch Midfielder’s Transfer

Phillips has been one of England's most exciting talents and a move to City is definitely an upgrade in the 26-year-old's career. He would now get to compete for major titles besides playing club football at the highest level. It was learnt that the player was also interested in playing under Pep Guardiola, who is one of the most successful managers in European club football. Next, Phillips would agree personal terms with the club and also pass his medical after which the deal would be completed. The player was earlier linked to a transfer to Manchester United.

Manchester City are also said to have been interested in signing left-back Marc Cucurella from Brighton.

(The above story first appeared on LatestLY on Jun 26, 2022 10:08 AM IST. For more news and updates on politics, world, sports, entertainment and lifestyle, log on to our website latestly.com).