The Dutchman has been one of Manchester United's top targets this summer transfer window and it seems that they are close to finally getting their man. Manchester United have had a host of top departures like Paul Pogba and Juan Mata among others and new signings need to be made as replacements. 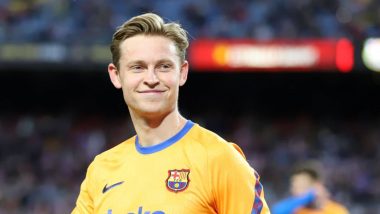 Manchester United are reportedly closing in on a deal to sign Frenkie de Jong this summer from Barcelona. The Dutchman has been a top target for the Red Devils all summer so far and now, recent reports have claimed that both teams have agreed on a fee of around  £68million for the midfielder's transfer. Should this transfer go through, de Jong would then become Manchester United's first of many expected signings of the summer transfer window. Robert Lewandowski Transfer News: Barcelona Suffer Huge Blow As Bayern Munich Increase Asking Price

De Jong's experience of working with new Manchester United manager Erik ten Hag might have prompted the Dutch boss to go hard for the midfielder. The pair had made it to the Champions League 2018-19 UEFA Champions League semifinal with Ajax. Manchester United are in need for a rebuild under their new boss after a poor season and departures of some big names, the likes of which include Paul Pogba, Nemanja Matic, and Edinson Cavani among others. De Jong would fit in perfectly in United's midfield if the transfer goes through.

Manchester United fans and also club's top star Cristiano Ronaldo had earlier reportedly expressed frustration over the Red Devils' lack of activity in the transfer market so far. It led to speculations of him leaving the club to look for other destinations where he has a higher chance of winning titles. Apart from de Jong, Manchester United have been linked with the likes of Antony and Jurrien Timber from Ajax.

(The above story first appeared on LatestLY on Jun 26, 2022 08:56 AM IST. For more news and updates on politics, world, sports, entertainment and lifestyle, log on to our website latestly.com).