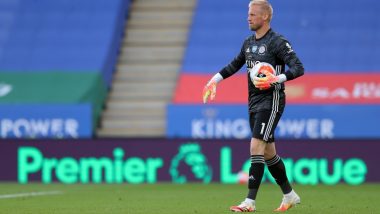 The two teams are fighting for a top-four finish that will help then gain a place in the next season's Champions League. United need just a draw while only a win will do for Liecester and their UCL hopes. Premier League 2020-21 Season to Begin on September 12.

Schmeichel, son of former Manchester United goalkeeper Peter, came to the aid of de Gea, who has come under intense scrutiny following his shoddy performance in the FA Cup semi-final that saw United lose 1-3 against Chelsea.

"For someone like David, I really feel for him because he has been unbelievable for so many years and every goalkeeper goes through periods [of poor form]," Schmeichel told Sky Sports.

"David de Gea is still a world-class goalkeeper. It's a lonely position and those are the margins you play in as a goalkeeper -- you simply cannot make mistakes because you will be punished," he added.

Earlier, Newcastle legend and football pundit Alan Shearer had urged Manchester United to bring back Dean Henderson from Sheffield United and make him their number one goalkeeper.

"I think it's time (to drop De Gea). It (mistake) keeps happening," Shearer said while speaking to BBC One.

"I think you bring Henderson back when you think he's going to be number one. He has to bring him back as number one otherwise keep him out on loan for experience, but, has that time come? Yes, I think it has."

(The above story first appeared on LatestLY on Jul 24, 2020 08:26 PM IST. For more news and updates on politics, world, sports, entertainment and lifestyle, log on to our website latestly.com).