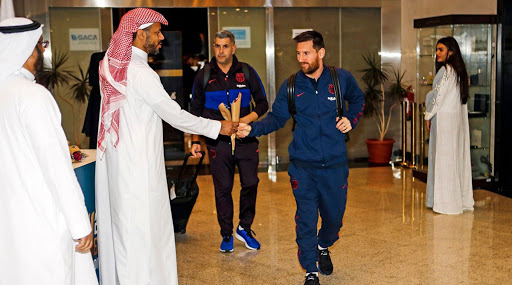 Lionel Messi and FC Barcelona have landed in Jeddah, Saudi Arabia ahead of their Supercopa de Espana clash with Atletico Madrid. The Catalan giants have been underwhelming in their league and Champions League campaign this season and the Super Cup offers them a chance to put that disappointment behind them and make a huge step towards getting hands on the first trophy of the new season. The semi-final clash will be held at the King Abdullah Sports City Stadium in Jeddah, Saudi Arabia on January 9, 2020 (Thursday). Lionel Messi’s Crazy Dribble Nearly Pulls Off Jaw-Dropping Assist During Barcelona vs Espanyol La Liga 2019-20 Clash (Watch Video).

FC Barcelona have landed in Jeddah before their Super Cup clash with Atletico Madrid and have called up a lot of youngsters from the B team for this encounter. The Spanish giants will be without the first-team regulars Marc Andre Ter Stegen, Ousmane Dembele and Arthur Melo as both as injured. As a result, Riqui Puig, Inaki Pena, Alex Collado and Arnau Tenas have been selected in the squad that will travel for this game. This will be the 36th edition of the competition and it was announced in February 2019 that the tournament has been changed from a two-team format to a four-team format. La Liga 2019–20 Result: Barcelona Stunned As Espanyol Hold Spanish Champions to a 2–2 Draw.

Speaking of the Super Cup, Real Madrid and Valencia will face off in the other semi-final clash on January 8, 2020 (Wednesday). TheseJeddah fixtures have excited a lot of football fans as there is a possibility of an El Clasico in the finals of the tournament if both Barcelona and Real Madrid manage to win their respective matches.