The Argentine was on the verge of leaving Barcelona in 2020 and eventually it did not happen that year. Messi ended up joining PSG in 2021. 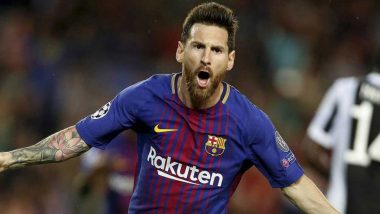 Lionel Messi leaving Barcelona was indeed one of the biggest developments in the world of sports, let alone football. The Argentine ended what was a glittering career at Camp Nou where he regularly broke records and made history for himself. Many fans were shocked after this decision was made public after talks over a new contract broke down and in a teary-eyed presser, the star forward announced his farewell from the club. Prior to that, Messi was also close to leaving Barcelona in 2020. Cristiano Ronaldo Says 'I Want to be at 2024 Euros' After Winning Best Scorer Award 2022 at Quinas de Ouro Ceremony

However, Messi's demands to stay back at Barcelona last year have surfaced in recent times. The Argentine had reportedly made nine requests to Barcelona for the club to retain him in 2020.

2) Box for his Luis Suarez and own family: Messi had surprisingly asked for a box for him and Luis Suarez at Camp Nou, from where they could watch matches.

4) Release clause removal: Messi wanted that Barcelona removed his release clause. Having a release clause allows other sides to explore the option of signing him. The Argentine wanted his €700 million realease clause to be removed, which was again rejected by Barcelona.

5) Repayment of wage cuts: The COVID-19 pandemic in 2020 took the world by storm and Barcelona had introduced pay cuts for Messi and many others to help fight the pandemic. He later asked for his deducted anyway at a 3% interest rate.

6) Private plane: This one is pretty self-explanatory with Messi asking Barcelona for a private plane.

7) Increase in wage with rise in tax: Messi wanted Barcelona to make up for the difference in his salary if the Spanish government ended up increasing the tax.

8) Continuing with personal assistant: Despite Messi's agent Pep Costa's future in doubt, especially with the pandemic raging on, the Argentine wanted him to carry on being under Barcelona's payroll.

9) Commission to brother: Messi also wanted Barcelona to pay his brother Rodrigo Messi as a renewal bonus. Rodrigo for the record, was Barcelona starlet Ansu Fati's agent at the time.

Eventually, the contract talks broke down and Messi left the club for a free transfer to PSG last summer. This season, he has shown signs of his own self after a poor start last year.

(The above story first appeared on LatestLY on Sep 21, 2022 06:56 PM IST. For more news and updates on politics, world, sports, entertainment and lifestyle, log on to our website latestly.com).