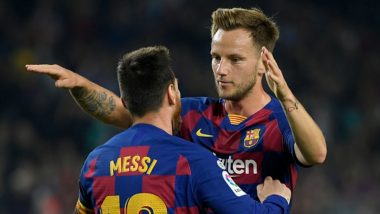 Lionel Messi has been in the news for his stunning goals, but here's another video that has cropped up online where the six-time Ballon d'Or winner was clearly seen ignoring his teammate Ivan Rakitic. The incident happened ahead of the game against Leganes when the teams were heading out of the tunnel. Messi hugged every member of the squad but ignored Ivan Rakitic very conveniently. He then proceeded to hug the other members of the team. Rakitic has been at the receiving end for quite a while now. Ivan Rakitic Posts a Picture With Lionel Messi, Football Fans Say, ‘Leave Barcelona’ Here's Why.

Almost a month ago, during the lockdown, Raktic had shared a picture of himself alongside Messi wherein the Croatian player was seen successfully handling the tackle by the Argentine during the FIFA World Cup 2018. Back then Croatia had won the game 3-0. While Messi was criticised for his lack of form, his fans slammed Rakitic for rubbing salt over their wounds. For now, let's have a look at the video we are talking about.

A few days ago, the midfielder had slammed Barcelona for having a lack of clarity about his role in the team. While slamming the Catalan Giants he said that he isn't a sack of potatoes that he can be put anywhere. However, Rakitic poured cold water over his rumours of exit and said that he has no reason to leave the team. While clarifying his statement, he said, "I could be talked to about everything. Because I never want anything by force. I want to deserve everything, let everything be as it should be. Because I always take the fair route, I don’t hide anything."

(The above story first appeared on LatestLY on Jun 19, 2020 05:24 PM IST. For more news and updates on politics, world, sports, entertainment and lifestyle, log on to our website latestly.com).