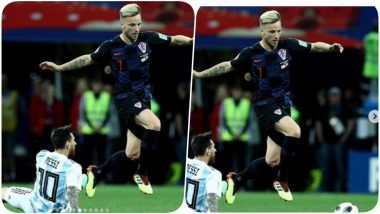 For years now, Lionel Messi has been a demi-god for Barcelona and its fans. Anything against Messi gets you unwanted wrath of the social media users who have loved the six-time Ballon d’Or winner. Now, Ivan Rakitic has also faced a backlash from the netizens as he posted a picture of Argentina vs Croatia, FIFA World Cup 2018 where the latter won the game 3-0. In the snap posted by Rakitic had dribbling past Messi with the six-time Ballon d’Or winner on the floor after the mid-fielder handled the tackle very well. This Day, That Year: When Lionel Messi Inspired Barcelona to 4–0 Win Over Bayern Munich in 2008–09 UEFA Champions League Season.

The picture certainly did not look very good for Lionel Messi and this surely did not go down well with Barcelona fans. The Barcelona fans trolled Rakatic and said that they want him out of the club on an immediate basis. The fans took to social media and expressed their displeasure and he faced the wrath of the netizens. Check out the picture below and then the tweets.

After some good time at Barcelona Ivan Rakitic has finally waved goodbye to fans! 😂😂 pic.twitter.com/V9uPPNFOuw

Talking about Messi he has been at loggerhead with Barcelona bosses for quite a long time now and is tipped to leave Barcelona this summer. He has been quite unhappy with the way things are at the top level management. Not very long ago did he slam the sporting director Eric Abidal for dragging the players for sacking their old manager Ernesto Valverde.  Clubs like Inter Milan, Juventus, Manchester United have been lined up to

(The above story first appeared on LatestLY on Apr 09, 2020 12:31 PM IST. For more news and updates on politics, world, sports, entertainment and lifestyle, log on to our website latestly.com).