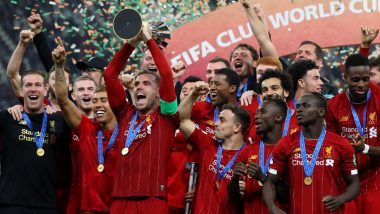 Liverpool Will Be Presented With the Premier League Trophy on Wednesday Night (Photo Credits: Getty Images)

Liverpool captain Jordan Henderson and club officials have joined hands with the Merseyside police to urge fans not to attend Anfield when Jurgen Klopp’s men lift the Premier League trophy. Liverpool will be presented with the EPL trophy on Wednesday night after their final home game against Chelsea. But with rumours circulating that some players will appear outside the stadium for the trophy celebration, many have raised concerns that fans may choose to gather outside the stadium despite the coronavirus threat. Merseyside police, however, quashed all such rumours and have asked fans to remain indoors. Liverpool's EPL Title Win Celebrations Rehearsed, Viral Video Shows the Scene at Anfield.

"Rumours circulating on social media about the team making an appearance outside Anfield tonight. This 100% will NOT happen,” the Merseyside police said in a statement on its official Twitter account. "The only place to watch tonight's celebrations is on TV.  Pls listen to the advice of your manager and players. Its what they want." Anfield Decorated With Life-Size Posters of Mohmed Salah & Co As Liverpool FC Clinch EPL After 30 Years (Watch Videos).

JOINT STATEMENT | We're working with @LFC @lpoolcouncil and @spiritofshankly ahead of this week's game with Chelsea. We're asking fans to watch the game and presentation at home, to keep themselves, their families, friends and neighbours safe. More here 👇https://t.co/l3SAbgVG78 pic.twitter.com/qRB3RqZo6S

Thousands of fans had gathered to celebrate the club’s first Premier League title in 30 years after Manchester City lost to Chelsea last month. This was after stringent COVID-19 restrictions were put in place to avoid and minimize the gathering. Things, however, turned ugly the next day when scores of fans gathered outside the Liverpool City Centre and aimed fireworks at the Liver building to set it ablaze while celebrating.

Cherish and enjoy the moment - it's for you ✊

We will be together, all together, when it's possible again. But for now, stay safe and celebrate at home ❤️ pic.twitter.com/UKqg8pZgN6

But in an effort to not repeat such scenes outside Anfield on Wednesday night when Liverpool play their final home game of the season, the Merseyside police have joined hands with the club, Liverpool City Council and the Spirit of Shankly supports' group to release a joint statement and urge fans to follow the trophy lifting and title celebrations from home.

"We are lifting it for you – you’ve driven us to achieving this dream. But this club’s values are about taking care of each other and that means supporting us from home and in safe environments." ✊

An important message from our captain... #StaySafe #LFCchampions

Liverpool captain Jordan Henderson also urged fans to support from home in a video clip posted on Liverpool’s official twitter page. "We are lifting it for you – you’ve driven us to achieving this dream. But this club’s values are about taking care of each other and that means supporting us from home and in safe environments,” said the Liverpool skipper.

Merseyside Police Chief Constable Andy Cooke said that a full policing operation will be in place at the ground as well as outside it on Wednesday night. People who fail to adhere to the rules will be arrested by the police or serve heavy fine notices for putting the public at health risk.

(The above story first appeared on LatestLY on Jul 22, 2020 05:48 PM IST. For more news and updates on politics, world, sports, entertainment and lifestyle, log on to our website latestly.com).