The defending Premier League champions have had poor luck with injuries this season as they have lost a number of their crucial players at different parts of the season. But according to the Jurgen Klopp, Alisson, Fabinho and Diogo Joto will be available ahead of their next fixture 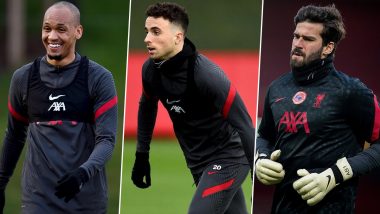 Liverpool have been plagued with injuries this season but the Reds could welcome a key trio of players for the clash against Chelsea on Thursday. Jurgen Klopp’s team brought an end to their losing run last time around, defeating Sheffield United 2-0 after enduring four consecutive defeats in the league and according to the manager, Alisson, Fabinho and Diogo Joto will be available ahead of their next fixture. Liverpool Beats Sheffield United 2-0 to End EPL Losing Run.

The defending Premier League champions have had poor luck with injuries this season as they have lost a number of their crucial players at different parts of the season. The Reds are still without defenders Virgil Van Dijk, Joe Gomez and captain Jordan Henderson and a date for their return is not yet known. However, the return of some key stars will help Liverpool in the latter half of the campaign. Liverpool Captain Undergoes Surgery, Jordan Henderson Likely To Be Out Till April.

‘Alisson and Fabinho, I am pretty sure [they can play], With Diogo, he was with us last night in the hotel, but he got sick overnight and we had to send him home. So it will depend on how quickly he recovers, obviously,’ Jurgen Klopp said after their win over Sheffield United.

‘He [Jota] wasn't in the squad, but he's trained with the team before [this week] and looked really good, like I said before. I think he will be available but I don't know. I would think that Diogo is ready for Thursday, but I don't know at the moment. Fabinho trained twice with the team and should be pretty close for the squad, I am sure. That is it pretty much,’ Klopp added.

Alisson missed the game against Sheffield United after the passing of his father earlier in the week. While Fabinho has been out of action since late January after picking up a knock against Manchester United in FA Cup and Diogo Jota has been on the sidelines since December.

(The above story first appeared on LatestLY on Mar 01, 2021 04:04 PM IST. For more news and updates on politics, world, sports, entertainment and lifestyle, log on to our website latestly.com).