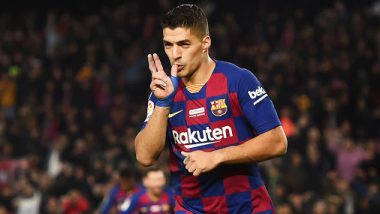 On Thursday, Liverpool ended a 30-year wait for a title in England’s top-flight as they were crowned Premier League champions for the first time in their history, following Manchester City’s 2-1 defeat against Chelsea. It was a day of celebration at Merseyside, as several former players, including current Barcelona star Luis Suarez, reached out to congratulate the new champions of England. The Uruguayan played for the Reds from 2011 to 2014. Here’s How Liverpool Players Celebrated First Premier League Title in Club's History (See Photos and Videos).

Luis Suarez joined the Reds in January 2011 from Ajax and it was during his time at the Merseyside club that the Uruguayan striker truly became a football superstar. The last time Liverpool came close to becoming Premier League champions was when Suarez spearheaded them during the 2013-14 season. Liverpool Crowned Premier League Champions, Euphoric Fans Celebrate Outside Anfield (Watch Videos).

The 33-year-old scored 31 times that season as the Reds fell short at the final hurdle, finishing second behind Manchester City. The Uruguayan left the club next season for Barcelona, ending his time at Merseyside. However, Liverpool have managed to find success since their star striker’s departure, defeating Luis Suarez’s Barcelona en route to the club’s sixth Champions League crown.

Now with Liverpool winning their maiden EPL title, Suarez reached out to offer his congratulations ‘Jordan and all the other Liverpool players - I am so happy for you and your family, and for the people working in Liverpool and the Liverpool fans,’ the Barcelona man told LFCTV. ‘I hope you enjoy this time because it’s amazing for the Liverpool supporters. You are the champions!’ he added.

With seven games left in the season, Jurgen Klopp’s men will have Manchester City’s 100 points league record in their sight and will be aiming to surpass that. The Reds travel to Manchester City this week as they take on Pep Guardiola’s men for the first time as the champions of England.

(The above story first appeared on LatestLY on Jun 27, 2020 09:40 AM IST. For more news and updates on politics, world, sports, entertainment and lifestyle, log on to our website latestly.com).