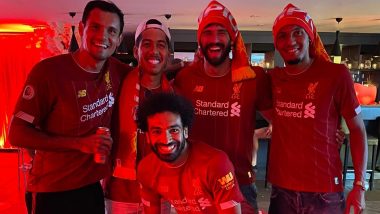 With Liverpool winning their game against Crystal Palace, they needed Chelsea to them a favour if they were to be crowned Premier League champions ahead of their trip to Manchester City next week. And as the final whistle blew at Stamford Bridge on Thursday night, the players celebrated like no other as the wait of 30 years for a domestic league title had finally come to an end. Liverpool Crowned Premier League Champions, Euphoric Fans Celebrate Outside Anfield (Watch Videos).

Jurgen Klopp’s men gathered at a hotel and watched outdoor on a screen as Chelsea emerged victorious against Manchester City, which confirmed their position at the top of Premier League summit and made them the champions for the 2019-20 season. The players couldn’t handle their emotions as they started jumping with joy, hugging each other and singing ‘Championes, Championes, Ole! Ole! Ole!’ as the dream finally turned into reality.

Jurgen Klopp was overwhelmed with emotions after the result and dedicated it to the Liverpool fans. ‘It's such a big moment, I am completely overwhelmed, It's for our supporters, it's for you out there.’ Said the Liverpool boss.

Words From the Boss

Mo Salah shared a photo on his social media in which he thanked the fans. 'Yes. It feels THAT good. I want to thank all our supporters watching us from all corners of the world.' the Egyptian tweeted.

Yes. It feels THAT good. I want to thank all our supporters watching us from all corners of the world. You made this possible for us and I hope we can keep bringing you the joy you deserve. 🎶 now they’re gonna believe us 🎶 😀 pic.twitter.com/bqkXM1Fjpj

Liverpool captain Jordan Henderson gave an emotional interview where he said 't’s another moment in our lives that we will never forget.'

“It’s another moment in our lives that we will never forget.”

With Premier Leaguer title already secure, Jurgen Klopp's men will be looking to break Manchester City's record of most points in a single season. With seven games left in the season, Liverpool need 15 points to overtake the record Pep Guardiola's men set in the 2016-17 season.

(The above story first appeared on LatestLY on Jun 26, 2020 09:47 AM IST. For more news and updates on politics, world, sports, entertainment and lifestyle, log on to our website latestly.com).