Romero picked up a knee injury while playing for Argentina against Spain last month. 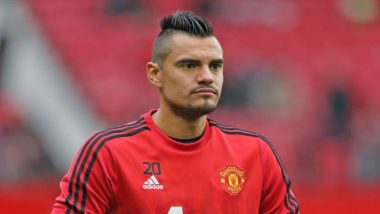 Manchester, April 18 : Manchester United and Argentina goalkeeper Sergio Romero is running out of time to prove his fitness ahead of Manchester United's FA Cup semi-final against Tottenham Hotspur on Saturday.

Romero picked up a knee injury while playing for Argentina against Spain last month, according to ESPN FC. Romero did not travel with the team scheduled to take on Bournemouth on Wednesday night's English Premier League clash.

Romero usually is in goal for FA Cup matches but if he is not available, first-choice David De Gea should take his place under the bar against Spurs.

Meanwhile, Luke Shaw, Daley Blind, Marouane Fellaini and Matteo Darmian have all been included in United's squad for the crunch Cup game.

Shaw has yet to take a firm decision about his future at Manchester United and will assess his options this summer, according to ESPN FC sources.

(The above story first appeared on LatestLY on Apr 18, 2018 05:20 PM IST. For more news and updates on politics, world, sports, entertainment and lifestyle, log on to our website latestly.com).