Super Eagles will face Croatian challenge on June 17 to kick off their FIFA World Cup 2018 campaign. 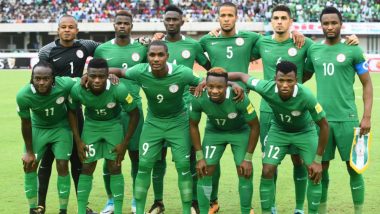 Nigeria is the only nation out of the five that played in the previous World Cup in Brazil to make it to the 2018 FIFA World Cup in Russia which is some achievement in itself depicting the consistent performance of the African nation. Gernot Rohr, their German head coach has gone with more or less the same squad throughout the campaign and barring any injury, has his mind made up about his 23-man squad. The key attribute of the Super Eagles is their cohesiveness which Rohr believes will take the team places in Russia. Let us take a look at Nigeria team lineup, their road to qualification in FIFA World Cup 2018 and star players who can make a difference to the side. FIFA World Cup 2018 Schedule in IST for PDF Download: Fixtures, Groups, Time Table with Match Timings & Venue Details of Football WC in Russia.

The Nigerians are struggling to find a proper goalkeeper which is their only area presenting them selection dilemma and 19-year-old Francis Uzoho who has started a few friendlies off late may be picked over struggling Ikechukwu Ezenwa. Leon Balogun, William Troost-Ekong and Chidozie Awaziem make up the three-man defense for the Golden Eagles. 31-year-old former Chelsea man Jon Obi Mikel is the captain of his side and although has lost pace but his ability to dictate the tempo is still good enough for a World Cup. Wilfred Ndidi and Ogenyi Onazi are the other two men for the defensive midfield role, and any two of three will start the games for Nigeria.

Attacking players like Victor Moses, Alex Iwobi and Kelechi Iheanacho have good Premier League minutes under the belt and can rip apart any opposition with their pace and skill. CSKA Moscow’s Ahmed Musa is another good attacking option Gernot Rohr can use in Russia.

Nigeria had a strong Group B CAF World Cup qualification campaign as they finished top with 13 points and secured a place in 2018 World Cup in Russia. Chelsea wideman Victor Moses was the leading scorer for Nigeria in the qualifiers with 3 goals.

Nigeria qualified for the round of 16 from Group F with a win over Bosnia and Herzegovina and a draw against Iran. Their defeat to Argentina did not matter much as they set up a clash with France in Brasilia. They were comfortably beaten in the round of 16 by a margin of 2-0 with the La Bleus qualifying for the quarter-finals.

Victor Moses: Although Chelsea has had a very disappointing Premier League season but one player that has been a consistent performer for them is Victor Moses. He has made darting runs on the wing and set up goals as well as scored on many occasions. He is also defensively good and tracks runners out wide.

Jon Obi Mikel: The veteran midfielder has won the Champions League, Europa League, African Cup of Nations and the EPL titles when in England with Chelsea and has much to offer to the squad both on and off the pitch. Mikel can share his experience with the younger members of the squad and get them up and ready for Russia. He is also good enough player and may play vital minutes for the Golden Eagles in the World Cup.

Super Eagles will face Croatian challenge on June 17 to kick off their FIFA World Cup 2018 campaign. Placed in Group D, the next fixtures featuring Nigeria are Nigeria vs Iceland on June 22 and Nigeria vs Argentina on June 26. As a part of World Cup warm-up game, they played Atletico Madrid on May 22 resulting in a 3-2 loss, but the side seemed satisfied.

(The above story first appeared on LatestLY on May 24, 2018 05:12 PM IST. For more news and updates on politics, world, sports, entertainment and lifestyle, log on to our website latestly.com).