Last night at the Allianz Arena, Portugal took on Germany in the Euro 2020. Portugal might have lost the match 2-4 but Cristiano Ronaldo made sure to catch up on his old friend Toni Kroos who plays for Germany. Even Ronaldo's former club Real Madrid shared the photo of the two having a moment. Toni Kroos and Cristiano Ronaldo played with each other for Real Madrid. 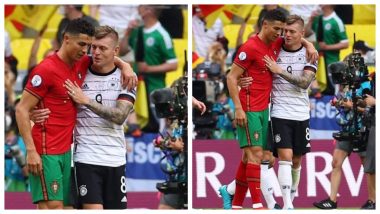 Talking about the game, Cristiano Ronaldo scored a stunning goal in the 15th minute of the match. Post this, Ruben Dias and Raphael Guerreiro scored own goals and chipped in with nothing but trouble for Portugal. After half-time, Kai Havertz and Robin Gosens netted goals at the 51st and 60th minute respectively. Diogo Jota scored a goal at the 67th minute but that was not enough to rescue Portugal who was already on the losing side.

Now, let's have a look at the post by Real Madrid:

With this, Cristiano Ronaldo's team will have to win their next game against France which will be held on June 24, 2021. The team had won their last match against Hungary 3-0 where Cristiano Ronaldo had scored a brace.

(The above story first appeared on LatestLY on Jun 20, 2021 10:05 AM IST. For more news and updates on politics, world, sports, entertainment and lifestyle, log on to our website latestly.com).