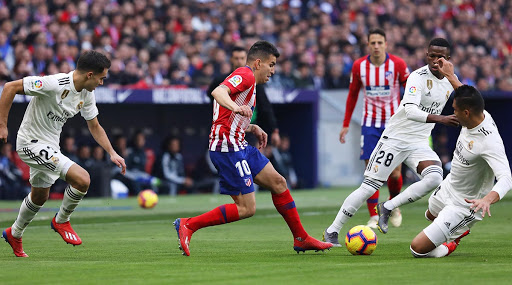 The 2020 Supercopa de Espana final sees two arch-rivals in Real Madrid and Atletico Madrid slog it out for the right to be called champions. While Real Madrid breezed past Valencia in the first semi-final, Atletico Madrid were involved in a thriller with Barcelona. The changes in the rules of the format has not been welcomed by media back in Spain but for the fans, A Madrid derby is one of the most sought after games in the season. Zinedine Zidane looks to have settled in his second stint with Real Madrid after a string of wonderful performances. On the other hand, Diego Simeone’s Atletico Madrid are a highly unpredictable team. Fans searching for live streaming details of Real Madrid vs Atletico Madrid in Spanish Super Cup can scroll down below. Lionel Messi Gets into a Spat With Joao Felix During Barcelona vs Atletico Madrid, Supercopa De Espana 2019-20, Team Barca Joins Confrontation (Watch Video).

The absence of Karim Benzema and Eden Hazard in attack is a problem for Zidane but it also opens up an opportunity for Luka Jovic who started against Valencia as well. Isco and Luka Modric are the two floaters in the team who will take up various positions in attack. Federico Valverde and Casemiro should keep things tidy in midfield with Toni Kroos making sure the Los Blancos maintain their fluid football. Skipper Sergio Ramos at the back has Raphael Varane as his defensive partner which is Real’s first-choice centre-back pairing. Toni Kroos Amazes the Internet With a Crazy Goal During Valencia vs Real Madrid, Supercopa De Espana 2019-20 (Watch Video).

Atletico Madrid will likely be without the services of Koke after the Spanish midfielder re-injured his hamstring after coming on as a second-half substitute against Barcelona. Hector Herrera and Thomas Partey in midfield are quality players with Saul Niguez and Angel Correa attacking from the wings. Joao Felix looked good against the Catalans and Diego Simeone will want the youngster to continue creating opening for striker Alvaro Morata.

The final of the Supercopa de Espana 2019-20 will be played between Real Madrid and Atletico Madrid at the King Abdullah Sports City Stadium in Saudi Arabia. The match is scheduled to take place on January 12, 2020 (Sunday) at 11:30 am IST.

Unfortunately, there is no official broadcaster of the Supercopa de Espana 2019-20 in India, hence no channel will provide the live telecast Real Madrid vs Atletico Madrid football match.

Real Madrid have beaten Atletico Madrid 110 times in the past and the record European champions have enjoyed the upper hand in the Madrid derbies. It should be close game with chances coming far and few with Real Madrid eventually winning.