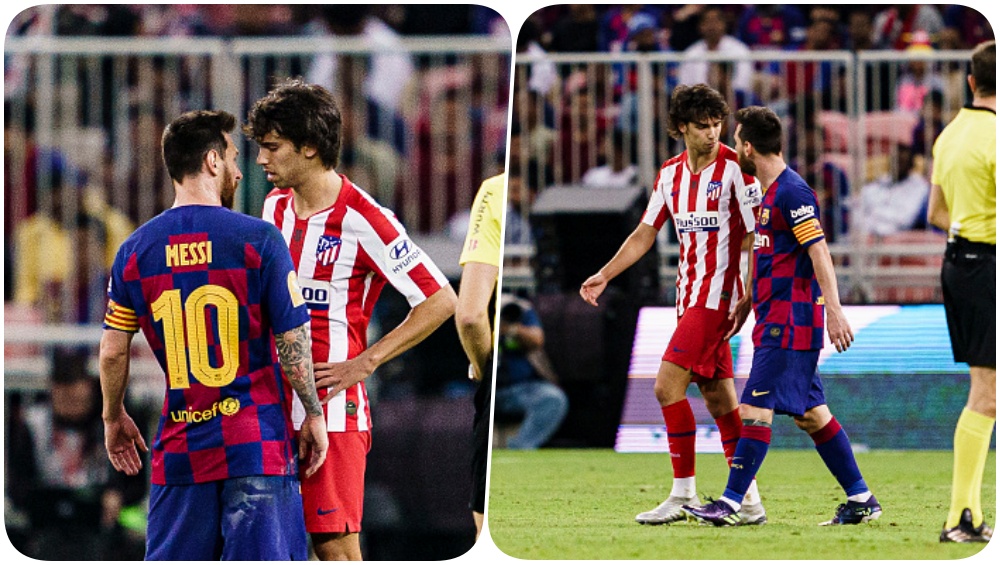 Lionel Messi Gets into a Spat With Jao Felix (Photo Credits: Getty)

Barcelona had a tough night as they lost to Atletico Madrid 2-3 during the semi-finals of the Supercopa De Espana 2019-20. Surely not everything went the way they Catalan Giants had planned. There was one moment in the game where Lionel Messi who got in a spat with Joao Felix. Gerard Piqué and Alvaro Morata rushed to separate the duo but later a few other players joined the confrontation. So here’s exactly what happened. The incident happened before the half-time when the scores read 0-0. It was Barcelona defender Jordi Alba who body blocked the Atletico Madrid striker. Lionel Messi Rebukes Teammates for Silly Mistakes After Atletico Madrid Stun FC Barcelona 3–2 in 2020 Spanish Super Cup Semi-Final.

This did not go down well with Felix who got into a war of words with the Catalan Giants’ defender. As a reaction to the same, Alba slapped Felix with his finger. Messi jumped in to save his teammate and then the two got into an altercation. The video of the argument between the two went viral on social media. Check out the video of the altercation below:

It was Koke who opened the goal for Atletico Madrid at the 46t minute of the game. Lionel Messi chipped in with a goal at the 51st minute and scored an equaliser. Just nine minutes later Antoine Griezmann joined the bandwagon and put the Catalan Giants on 2-1. Alvaro Morata scored an equaliser by converting a penalty into a goal and Angel Correa slammed the last goal and walked away with the semi-final match. After the defeat, Messi went on to slam the team for the kiddish errors they made during the game.