Real Madrid central defender Raphael Varane has tested positive for COV0D-19 ahead of the Champions League encounter will Liverpool. The Frenchman was named in the initial 21-member squad by Zinedine Zidane but will now have to make do with one of his experienced stars. 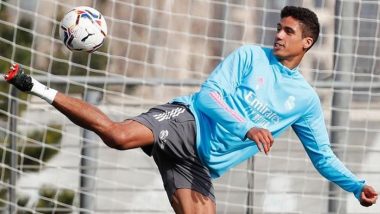 Real Madrid star Raphael Varane is set to miss the first leg of the UEFA Champions League 2020-021 quarter-final clash against Liverpool after returning a positive coronavirus diagnosis in the latest round of testing. The French centre-back’s absence adds further woes to the already depleted back-line of the record Spanish champions ahead of this all-important encounter. Real Madrid Announces 21-Member Squad for UCL 2020-21 Game Against Liverpool.

Real Madrid released a statement saying central defender Raphael Varane has tested positive for COV0D-19 ahead of the Champions League encounter will Liverpool. The Frenchman was named in the initial 21-member squad by Zinedine Zidane but will now have to make do without one of his experienced stars. Real Madrid Captain Injured While Playing For Spain, Will Not Play Against Barcelona & Liverpool.

Raphael Varane joins club captain Sergio Ramos and Spanish right-back Dani Carvajal on the sidelines as Zinedine Zidane will miss three of the four of his first-choice backline. Both Ramos and Carvajal were already ruled out of the clash due to their respective injuries and were not named in the matchday squad.

Raphael Varane will now enter the mandatory self-isolation period and will have to return a negative COVID-19 test before joining the team for footballing activities. Along with the Liverpool clash, the French centre-back is also expected to miss next week’s El Clasico and both Real Madrid and Barcelona look to upstage Atletico at the top of La Liga.

Real Madrid have had the better of Liverpool in recent encounters, winning the previous three fixtures in the Champions League between them. However, it was the English club who prevailed in the last knockout tie between the two sides, winning 5-0 on aggregate and inflicting the heaviest defeat on Los Blancos in a knockout fixture.

(The above story first appeared on LatestLY on Apr 06, 2021 05:23 PM IST. For more news and updates on politics, world, sports, entertainment and lifestyle, log on to our website latestly.com).