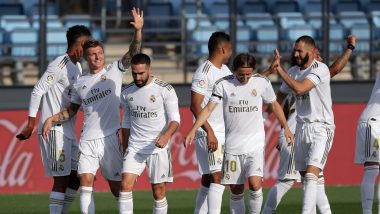 Defending champions Real Madrid begin the 2020/21 campaign against Real Sociedad in an away tie looking to continue their immense form they showed at the end of last season. Zinedine Zidane has not been active in the summer transfer window but letting go of Sergio Reguilon and Gareth Bale would have brought some breathing space with the board feeling a bit lightweight in the wage department. Real Sociedad had a breakthrough campaign last season where they managed to make it to the Europa League. They will be keen to build onto their sixth place with a bright start. Real Madrid versus Real Sociedad will be streamed on the Facebook page of La Liga from 12:30 am IST. Sergio Ramos Should Retire Here at Real Madrid, Says Zinedine Zidane.

Asier Illarramendi, Luca Sangali, Joseba Zaldua, Igor Zubeldia, Martin Zubimendi, Jon Guridi, and even star-striker Willian Jose are all missing for Real Sociedad which is a big blow to their chances. Mikel Oyarzabal has established himself as a traditional left winger for the Spanish national team and he has the potential to trouble the famed Madrid backline. Alexander Isak in a lone striker role will have plenty to do with the visitors expected to dominate possession.

Eden Hazard’s time in Spain has been marred by injuries and the latest setback is bound to frustrate fans. The Belgian skipper is expected to be out for a few weeks with Vinicius Jr set to take his place in the playing eleven. Karim Benzema, who has been a fantastic servant to the club over the years will start yet another campaign as the target man up top. Martin Odegaard is pushing for a start for the visitors after excelling last season on loan at Real Sociedad.

There is no official broadcaster for La Liga 2020-21 in India. Hence, fans will be unable to catch the live action of Real Sociedad vs Real Madrid on their TV screens.

Where to Get Free Live Streaming of Real Sociedad vs Real Madrid, La Liga 2020-21 Football Match?

Real Sociedad vs Real Madrid Match in La Liga 2020-21 can be streamed online on the official Facebook page of La Liga. So fans can tune into La Liga FB page to catch the action live. Real Madrid have won eight of their last ten games against Real Sociedad and though it may not be easy tonight, they will likely come away with all three points.

(The above story first appeared on LatestLY on Sep 20, 2020 02:08 PM IST. For more news and updates on politics, world, sports, entertainment and lifestyle, log on to our website latestly.com).