Sassuolo vs Juventus, Serie A 2019-20: Cristiano Ronaldo, Paulo Dybala and Other Players to Watch Out in SAS vs JUV Football Match

Juventus somehow managed to avoid defeat against Atalanta last time around as an injury-time penalty from star man Cristiano Ronaldo, end the game on level terms. Meanwhile, Sassuolo are unbeaten in six games, which includes a win over Lazio and a draw against Inter Milan. This is a must-win game for Sarri’s men as any further drop points could prove critical 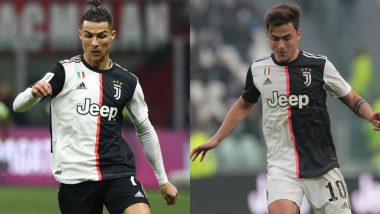 Juventus will continue their search for a ninth successive domestic league title when they travel to take on Sassuolo in the latest round of Serie A 2019-20 fixtures, The clash will be played at the  Mapei Stadium on July 15, 2020 (late Wednesday night). Maurizio Sarri’s men have a six-point lead at the top and will be looking to stretch that but it will not be easy against De Zerbi’s side, who themselves are fighting for European qualification. Cristiano Ronaldo, Paulo Dybala & Team Juventus Takeoff to Sassuolo, Bianconeri Shares Snaps & Video on Social Media.

Juventus somehow managed to avoid defeat against Atalanta last time around as an injury-time penalty from star man Cristiano Ronaldo, end the game on level terms. Past two games have been difficult for the Bianconeri’s as they have managed just one point from them which has allowed the chasing pack in the title race. So this is a must-win game for Sarri’s men as any further drop points could prove critical come the end of the season. Sassuolo vs Juventus, Serie A 2019: Check Out the Line-Ups for SAS vs JUV at Mapei Stadium.

Sassuolo, on the other hand, have found their groove and are mounting a late push for Europa League qualification, They are unbeaten in six games, which includes a win over Lazio and a draw against Inter Milan, De Zerbi’s side has shown that they can go toe to toe with the big boys in Italy, but tonight’s game will show their true potential.

So ahead of this all-important clash we take a look at some players from both the teams who could turn out to be the deciding factors.

There might not be a bigger or a better player in the Sassuolo squad than Domenico Berardi. The 25-year-old has been nothing short of sensational this season. He has been involved in 18 Serie A goals, scoring 12 of them. The Italian forward will have a point to prove against his former employers, who let him go in 2015.

The Portuguese forward continued his recent goal-scoring run when he netted a brace against Atalanta from the penalty spot. This took the 35-year-old’s league tally to 28, just one behind top-scorer Ciro Immobile. The five-time Ballon d’Or winner will be eager to get on the score sheet and move up the ladder in the scoring chart.

The Italian forward is having a stellar first season in the Green & Black of Sassuolo. The 32-year-old has netted 16 league goals this season and was also among them in the last game against Lazio when he struck in injury-time to give his side all three points. He will be eager to replicate similar heroics against yet another top team.

The Argentine was back in the line-up against Atalanta after being left-out against Milan but lasted only 70 minutes. He will once again push to feature from the start as his creativity and passing skills will be important if Juventus are to outscore their opponents in what is expected to be a high-scoring affair.

(The above story first appeared on LatestLY on Jul 15, 2020 09:59 PM IST. For more news and updates on politics, world, sports, entertainment and lifestyle, log on to our website latestly.com).