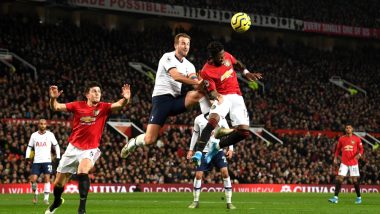 Tottenham Hotspur is hosting Manchester United at their backyard after a long gap of three months which was enforced due to the outspread of the coronavirus. In this article, we shall bring you the predicted line-up for the match, but before that let's have a look at the preview of the game. Placed at number five of the EPL 2019-20 points table, United had 45 points in their kitty. The Red Devils would be looking to win their first game to gain momentum in the points table. Three more points and they leave the Blues behind owing to the goal difference. Dele Alli Doesn’t Deserve One-Match Ban, Says Tottenham Hotspur Manager

Tottenham Hotspurs is placed on the eighth spot and is six points behind United and a win here would bring them closer to the top five spots. Last time when United hosted Tottenham it was the Red Devils who walked away with Marcus Rashford's brace. United won the game 2-1. Talking about the players of both sides, Ole Gunnar Solskear said that Paul Pogba could make his first appearance for the side. The French footballer looked sharp in his practice sessions. Whereas for Tottenham, they will be missing out on the services of Dalle Alli who has been banned for a hurtful racist comment to an Asian man a few months ago.

Jose Mourinho is quite upset with his ban and said that his player had been targetted in an unfair manner. Apart from Japhet Tanganga and  Giovanni Lo Celso, there have been no major injury concerns for the hosts as most of the players have recovered. Now, let's have a look at the predicted line up for both teams.

(The above story first appeared on LatestLY on Jun 19, 2020 06:48 PM IST. For more news and updates on politics, world, sports, entertainment and lifestyle, log on to our website latestly.com).