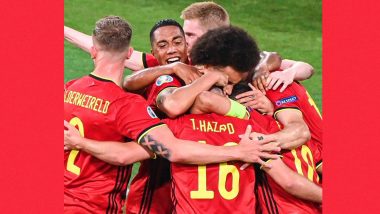 The Dortmund attacking midfielder scored in the 42nd minute on Sunday when he got the ball just outside the box and fired a superb shot into the bottom right, reports Xinhua.

"It was a nice goal and we beat the holders," said the 28-year-old, who was named the Player of the Match. Euro 2020 Day 18 Schedule: Today's Matches With Kick-Off Time in IST, Upcoming Fixtures and Live Streaming Details Of Round of 16 Fixtures.

Roberto Martinez's side will next face Italy, who are the only other team having won every game so far in the tournament, in Munich on July 2.

"Today was like a final...and Italy is also a complicated game," Thorgan Hazard added.

But some injuries that happened in the match have cast some shadow on Belgium's victory as playmaker Kevin De Bruyne limped off early in the second half because of an injury after being tackled from behind by Portuguese Joao Phlhinha.

The Red Devils suffered another injury in the closing period as Real Madrid star Eden Hazard was replaced by Yannick Carrasco after straining his hamstring.

"Looking at that second half, we are lucky to win," Belgium defender Thomas Vermaelen said.

"Portugal made it really hard for us. We had to really stay focused. It has cost us a lot of energy, but we have some time to recover and now we are looking forward to the game against Italy."

Fernando Santos' team pushed hard in the second half as Ruben Dias' header was punched away by Thibaut Courtois and Raphael Guerreiro's attempt hit the post.

The title holders enjoyed 56 per cent ball possession and made 24 attempts, four times than their rivals, but lacked efficiency, accuracy and also some luck to earn them a victory.

"I think it's an unfair result, but they scored and we didn't," said Santos. "We came back and thought we could turn it around. My players tried their best, but the ball wouldn't go in, that's football."

"We're very disappointed; we thought we could win this tournament again after 2016. Some of my boys are crying in the changing room. All of Portugal should be proud of what they did today."

Belgium, who are striving for their first major title, benefited from an extra 48 hours' rest after easily winning Group B with three straight wins, while Portugal arrived in the knock-out stage with only one win from their group matches -- a 3-0 verdict over Hungary in the opener.

They then lost to Germany 2-4 and drew with France 2-2 to advance from the tough Group F as one of the best third-placed teams.

Portugal's superstar Cristiano Ronaldo, who attracted most of the attention, failed to extend his scoring streak and stayed on 109 international goals to share the men's record with former Iran's striker Ali Daei.

The 36-year-old veteran has already broken some records after registering five goals from the three group matches -- breaking the tie with Michel Platini to become the sole all-time best scorer of the tournament with 14 goals.

Ronaldo also surpassed Germany's Miroslav Klose in the record for most goals scored by a European player (21 goals) in major events (Euros and World Cups combined).

(The above story first appeared on LatestLY on Jun 28, 2021 11:23 AM IST. For more news and updates on politics, world, sports, entertainment and lifestyle, log on to our website latestly.com).