Zlatan Ibrahimovic Trolls England As he Recreates His Famous 2012 Overhead Kick In the Sea, Says ‘God Save The Queen’ (Watch Video) 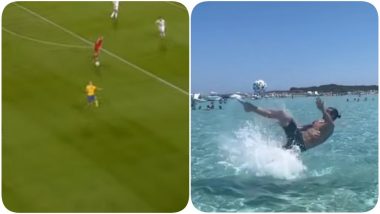 Zlatan Ibrahimovic is indeed one of the cheekiest players in the history of football.  Very often does he take a dig at the best of stalwarts and get them tongue-tied not only with his performance but also with his words. This time he trolled the fans of England by recreating his famous 2012 overhead kick while he is on his holiday. The former Manchester United striker not only shared the video on social media and also shared the same with the caption, “God save the Queen.” In 2012, Zlatan netted that famous goal against England. He led the team to a 4-2 win. Stuart Broad Reacts to Zlatan Ibrahimovic’s ‘I Can Play till 50’ Statement, Says ‘Sounds Alike James Anderson’.

As of now, Zlatan is on holiday with his wife and two sons after a gruelling season with AC Milan in the Serie A 2019-20. The former Swede player had rejoined AC Milan earlier this year and has been blazing guns for the side. He had posted a picture of the same. While on a holiday the 35-year-old not only decided to flaunt his agility but hilariously trolled the fans of England. Now, let's have a look at the video posted by Zlatan below

God Save the Queen

Here's the kick by Zlatan netted in 2012

There is no official word as yet on Zlatan staying at AC Milan. However, a lot of reports suggest that the club is keen on retaining his services for the upcoming season as well. The 35-year old is heavily linked to Leeds as well.

(The above story first appeared on LatestLY on Aug 12, 2020 04:06 PM IST. For more news and updates on politics, world, sports, entertainment and lifestyle, log on to our website latestly.com).