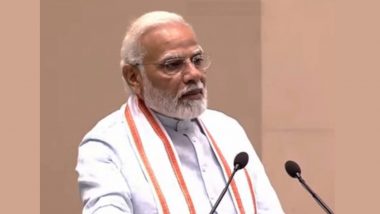 The Prime Minister also said that several athletes who competed at the games this year came from humble families and their parents had a major role to play in the life of those athletes. PM Modi mentioned Adil Altaf, a tailor's son from Srinagar, who won the 70km road cycling race at KIYG 2021 and made the entire valley of Jammu and Kashmir proud. He also mentioned about gold medal winning weightlifters L Dhanush and Kajol Sargar. A Chennai carpenter's son, L Dhanush, won weightlifting gold medals at the games, while Kajol from Sangli, Maharashtra, dabbled between helping her tea vendor father and weightlifting training.

(The above story first appeared on LatestLY on Jun 26, 2022 04:43 PM IST. For more news and updates on politics, world, sports, entertainment and lifestyle, log on to our website latestly.com).