Though India conceded a goal in the 48th minute, the team's defence remained resolute through the match to win it 4-1. 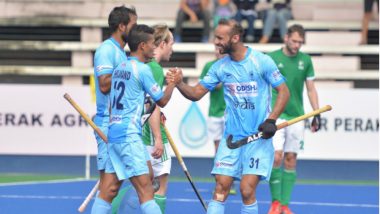 Ipoh, March 10: Indian men's hockey team beat Ireland 4-1 to end their campaign at the 27th Sultan Azlan Shah Cup in the fifth position. It was goals by Varun Kumar (5', 32'), Shilanand Lakra (28') and Gurjant Singh (37') that ensured India finished with a win. Meanwhile, Ireland's lone goal was scored by Julian Dale (48').

The Men in Blue began with the strong attack early on that helped them win back-to-back penalty corners in the 5th minute. It was an infringement on Ireland's part when Simranjeet Singh was attempting a shot on goal that resulted in the penalty corner. Though the first attempt was saved, a tussle for the ball in the circle resulted in another penalty corner. This time Varun Kumar found success to give India a 1-0 lead.

In the second quarter, forward Shilanand Lakra beat Ireland's goalkeeper Jamie Carr to double the lead to 2-0. India began the third quarter Varun Kumar pumped a brilliantly struck dragflick past Carr to take India's lead to a comfortable 3-0. India's next goal came off Gurjant Singh in the 37th minute. It was brilliant play by Talwinder Singh who received a good pass from Simranjeet Singh and later connected it to Gurjant who made no mistake in putting it into the post.

Though India conceded a goal in the 48th minute, the team's defence remained resolute through the match to win it 4-1.