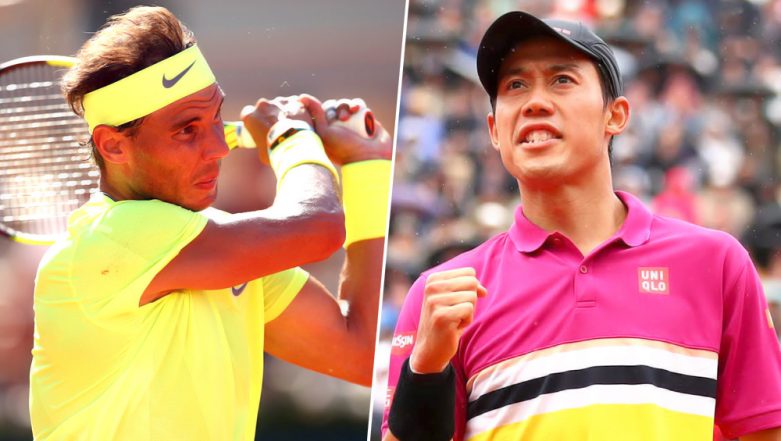 The 11-time French Open champion and 'King of Clay' Rafael Nadal is all set to face Japan's Kei Nishikori in the quarter-finals (QF) of French Open 2019 today, on Tuesday. The world no 2 and number 2 seed at Roland Garros 2019, as well as defending champion Nadal will face the world no 7 Kei Nishikori at the Philippe-Chatrier Court in QF match. Rafael Nadal has won 17 Grand Slam singles titles, only three less than Roger Federer (20) who has the most number of titles, and is in pursuit of 12th title at the Roland Garros 2019. The Spaniard already holds the record for the most titles won (11) at a single tournament by a male player. If you are looking for live telecast and free streaming online details of Rafael Nadal vs Kei Nishikori quarter-final match in French Open 2019, you will find it all here. Also, get information on match timings in IST (Indian time) and TV channels doing the live coverage of the game. French Open 2019: Rafael Nadal, Roger Federer Set Up Potential Semifinal.

The 32-year-old Nadal already holds the record for the most number of French Open (11) titles won by a player not just in the history of Roland Garros but all Grand Slams. On the other hand, Japan's Kei Nishikori is the first ever male Asian player to have reached the finals of a men's singles grand slam (2014 US OPEN). Nadal and Nishikori have played each other a total of 12 times in their career. The Spaniard leads Nishikori 10-2 in head to head career battles. However, Nishikori has not beaten Nadal on clay in any of their previous meetings.

The Rafael Nadal vs Kei Nishikori match is scheduled to begin at 6.45 PM (Indian Standard Time). The contest will be played at the Philippe-Chatrier Court.

The Rafael Nadal vs Kei Nishikori match can also be viewed online. Video streaming platform Hotstar will play the live streaming of the match. Fans can watch the full match on Hotstar.

The King of Clay then beat Argentina's J Londero in straight sets (6-2, 6-3, 6-3) to advance to the quarter-finals of the French Open. As for Nishikori, he has made it to the quarter-final stage at Roland Garros for the third time but look to reach the last four of French Open for the first time. The Japanese played and won two back to back five-set matches in the third and fourth round against Laslo Dere and Benoit Paire respectively.