Wimbledon Championships 2022: WTA Too Decides Not To Award Ranking Points for This Year

Less than a day after the Association of Tennis Professionals (ATP) -- the governing body of the men's professional tennis circuits -- stripped Wimbledon of ranking points due to its ban on Russian and Belarusian players, the Women's Tennis Association (WTA) followed suit, saying it will also "not award WTA ranking points for this year's Wimbledon Championships". 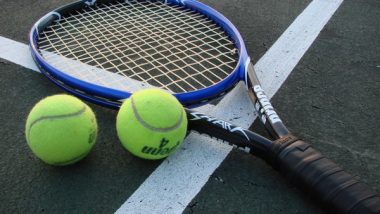 New York, May 21 : Less than a day after the Association of Tennis Professionals (ATP) -- the governing body of the men's professional tennis circuits -- stripped Wimbledon of ranking points due to its ban on Russian and Belarusian players, the Women's Tennis Association (WTA) followed suit, saying it will also "not award WTA ranking points for this year's Wimbledon Championships". The WTA said in a statement on Saturday that the, "recent decisions made by the All England Lawn Tennis Club (AELTC) and the Lawn Tennis Association (LTA) to ban athletes from competing in the upcoming UK grass-court events violate that fundamental principle, which is clearly embodied in the WTA rules, the Grand Slam rules and the agreement the WTA has with the Grand Slams." French Open 2022: Novak Djokovic, Rafael Nadal Seeded To Meet in Quarterfinals.

Ian Hewitt, chairman AELTC had announced in April that Russian and Belarusian players will not be allowed to play in the UK this summer following Russia's invasion of Ukraine. The decision meant the likes of Daniil Medvedev, Andrey Rublev, Aryna Sabalenka, Anastasia Pavlyuchenkova and Victoria Azarenka will miss out on the Grand Slam this year. WTA chief executive, Steve Simon, said in the statement on Saturday that, "The atrocities happening to millions of innocent people in Ukraine because of Russia's unprovoked invasion are horrific and appalling. The WTA strongly condemns Russia's ongoing attack.

"Nearly 50 years ago, the WTA was founded on the fundamental principle that all players have an equal opportunity to compete based on merit and without discrimination. The WTA believes that individual athletes participating in an individual sport should not be penalised or prevented from competing solely because of their nationalities or the decisions made by the governments of their countries. "As a result of the AELTC's position that it will not honour its obligation to use the WTA Rankings for entry into Wimbledon and proceed with a partial field not based on merit, the WTA has made the difficult decision to not award WTA ranking points for this year's Wimbledon Championships."

Simon also stated that three WTA-sanctioned events -- Nottingham, Birmingham, and Eastbourne -- will also be penalised. "In addition, each of the WTA-sanctioned events (Nottingham, Birmingham, and Eastbourne) will be penalised and their WTA tournament sanctions will be placed on probation. Since alternative and comparable playing and ranking point opportunities exist in the same weeks as those events for the affected players, WTA ranking points will remain in place for those events.

"The stance we are taking is about protecting the equal opportunities that WTA players should have to compete as individuals. If we do not take this stance, then we abandon our fundamental principle and allow the WTA to become an example to support discrimination based on nationality at other events and in other regions around the world. The WTA will continue to apply its rules to reject such discrimination. Wimbledon Loses Ranking Points Over Ban of Russian, Belarusian Players Amid Russia-Ukraine War.

"We remain hopeful and willing to reassess the issuance of points should we find a solution that has consensus from all parties and allows our players the opportunity to compete in a unified environment. We continue our humanitarian relief efforts to support Ukraine through Tennis Plays for Peace, which to date has raised over USD1.1 million and continues to provide meaningful assistance," added Simon. Earlier, on Friday, ATP had said it will not award ranking points for Wimbledon this year following the All England Club's decision to ban players from Russia and Belarus. The Wimbledon begins on June 27.

"The ability for players of any nationality to enter tournaments based on merit, and without discrimination, is fundamental to our Tour. The decision by Wimbledon to ban Russian and Belarusian players from competing in the UK this summer undermines this principle and the integrity of the ATP Ranking system," the ATP said in a statement. "It is also inconsistent with our Rankings agreement. Absent a change in circumstances, it is with great regret and reluctance that we see no option but to remove ATP Ranking points from Wimbledon for 2022," it added.

(The above story first appeared on LatestLY on May 21, 2022 02:07 PM IST. For more news and updates on politics, world, sports, entertainment and lifestyle, log on to our website latestly.com).