World No. 1 and defending champion, Novak Djokovic, will have his task cut out at the French Open beginning on May 22 as he could face 13-time Roland Garros winner Rafael Nadal in the quarterfinals, with the Spanish fifth seed drawn in the same quarter as the Serb. 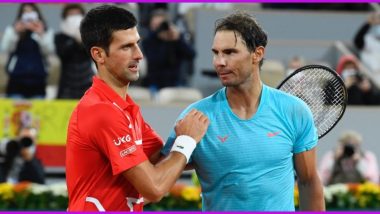 Paris, May 21 : World No. 1 and defending champion, Novak Djokovic, will have his task cut out at the French Open beginning on May 22 as he could face 13-time Roland Garros winner Rafael Nadal in the quarterfinals, with the Spanish fifth seed drawn in the same quarter as the Serb. Also, talented Spanish player Carlos Alcaraz joins the two stalwarts in the top half as the sixth seed, and could face Djokovic or Nadal in the semifinals. Alcaraz, who will be making his second appearance at the clay-court Grand Slam, has been placed in third seed, Germanys Alexander Zverev's quarter.

Russia's Daniil Medvedev anchors the draw on its bottom line, with fourth seed from Greece Stefanos Tsitsipas in the third quarter alongside eighth seed Casper Ruud of Norway. Russia's Andrey Rublev, seeded seventh, is a potential quarterfinal opponent for Medvedev, according to atptour.com. Speaking at the draw ceremony, Djokovic expressed his happiness at the full return of fans at the second major of the year. "It's amazing to see the amount of people that came this week during the qualifying week and also at the practice sessions," the Serb was quoted as saying by atptour.com. Wimbledon Loses Ranking Points Over Ban of Russian, Belarusian Players Amid Russia-Ukraine War.

"A lot of people on the centre court and on Court Suzanne Leglen as well. It's fantastic to see that because you can see how much they miss tennis, how much they are passionate and how much they love this sport. And of course for us players, it's an incredible feeling to have the crowd. "Particularly for me at this stage of my career, they are one of the main factors of why I still play professional tennis and why I compete. The energy that you get from the crowd, the excitement is something very important for us."

Djokovic will open against Japan's Yoshihito Nishioka and could face Diego Schwartzman of Argentina or Grigor Dimitrov of Bulgaria in the fourth round. Nadal's first-round opponent is Aussie Jordan Thompson, with Swiss player Stan Wawrinka looming as a potential second-round opponent. Ninth seed Felix Auger-Aliassime of Canada and 17th seed Reilly Opelka of the US are potential fourth-round matchups for the Spaniard. Both Alcaraz and Zverev open against qualifiers, with the unseeded Dominic Thiem of Austria a dangerous floater in that second quarter. Thiem faces Hugo Dellien of Bolivia in the first round, with the winner to face 21st seed Karen Khachanov of Russia or a qualifier in the second round. Judy Murray, Tennis Coach and Mother of Jamie and Andy Murray, Reveals Harrowing Episode of Being Sexually Assaulted.

The third quarter features three of the draw's more intriguing opening-round matchups. Tsitsipas will take on Italian Lorenzo Musetti, 14th seed Denis Shapovalov faces Dane Holger Rune of Denmark and Casper Ruud of Norway takes on wild card Jo-Wilfried Tsonga, with the Frenchman set to retire following Roland Garros. Medvedev will seek his first clay win of the season against Facundo Bagnis of Argentina in the opening round, while Rublev opens against Soonwoo Kwon of Korea. Also in the fourth quarter, 11th seed Jannik Sinner of Italy will face a qualfiier in the opening round, while 16th seed Pablo Carreno Busta of Spain faces home favourite Gilles Simon in the Frenchman's final Roland Garros before his planned retirement at the end of the year.

(The above story first appeared on LatestLY on May 21, 2022 11:58 AM IST. For more news and updates on politics, world, sports, entertainment and lifestyle, log on to our website latestly.com).