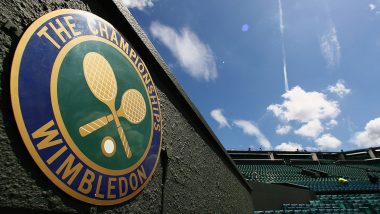 London, April 9: The 2020 edition of the Wimbledon had to be cancelled due to the outbreak of the coronavirus, but The All England Club is set to pocket over £100 million due to the insertion of a virus-related clause in the insurance policy post the SARS outbreak.

According to the Times, Wimbledon chiefs are to see their insurance triggered by the cancellation with the clause that covers infectious diseases set to be worth as much as £100m. The club is said to be in the process of putting together a claim on those lines.

The All England Lawn Tennis Club (AELTC) while announcing the cancellation said that the Wimbledon will now be held from June 28 to July 11, 2021. It marked the first time since 1945 -- during the Second World War -- that the Championships won't take place in a tennis season and the first time it has been cancelled in the Open era.

"It is with great regret that the Main Board of the All England Club (AELTC) and the Committee of Management of The Championships have today decided that The Championships 2020 will be cancelled due to public health concerns linked to the coronavirus epidemic. The 134th Championships will instead be staged from 28 June to 11 July 2021," the AELTC said in its statement.

It also said that it has taken into account the impact of the cancellation on "those who rely on The Championships — including the players and the tennis community in Britain and around the world" and are developing plans to support those groups. "This also applies to our loyal staff, to whom we take our responsibility very seriously," said the AELTC.

(The above story first appeared on LatestLY on Apr 09, 2020 09:41 AM IST. For more news and updates on politics, world, sports, entertainment and lifestyle, log on to our website latestly.com).