With Alexander Zverev Winning the Nitto ATP Finals 2021, Novak Djokovic’s Dominance Could Be Tested Next Year

When the ATP Rankings are released later on Monday, Djokovic will have a lead of nearly 3,000 points over Medvedev and nearly 4,000 over Zverev. But with three major titles, Australian Open, French Open and the Wimbledon, to defend in 2022 and two rising stars in great form, the Serbian will have his hands full in 2022. 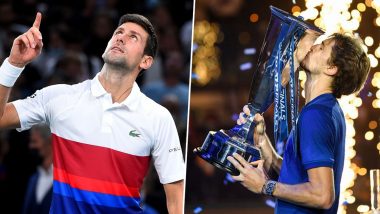 Turin, Nov 22: World No. 1 Novak Djokovic will have his hands full when the new season commences with the first major of the year, the Australian Open, as he not only has to contend with a resurgent Daniil Medvedev of Russia but also Germany's Alexander Zverev, who won the Nitto ATP Finals here late on Sunday night.

Zverev, the 2020 Tokyo Olympic Games gold medallist, finished his 2021 season in the best way possible when he claimed his second Nitto ATP Finals trophy, signalling what could be an even bigger 2022 for the 24-year-old star. Zverev is flying high after beating world No.2 Medvedev in the Turin final and could now be poised to chase Djokovi's No. 1 spot in the ATP Rankings alongside Medvedev next year.

"(Things) couldn't be much better, to be honest. I'm obviously happy with how the season went. I'm happy with the finish of the season," Zverev said. "It was obviously a great year. To capture the title here has been incredible. Give me the trophy!" Alexander Zverev Beats Daniil Medvedev To Clinch ATP Finals 2021 Title, Check Out His Winning Moment Here (Watch Video).

When the ATP Rankings are released later on Monday, Djokovic will have a lead of nearly 3,000 points over Medvedev and nearly 4,000 over Zverev. But with three major titles, Australian Open, French Open and the Wimbledon, to defend in 2022 and two rising stars in great form, the Serbian will have his hands full in 2022.

.@AlexZverev had a tough year on/off the court. I know how much tennis helps me to grow & I’m happy that it was Sascha’s winning field this year. He is such a great guy. I can only say words of praise for him & his team. Well done for grand season finale & a big trophy Sascha! pic.twitter.com/JDkt9jJcC4

Since the start of the Tokyo Olympics, Zverev has played the best tennis of his career, winning 32 of his 36 matches to close his season. He earned the singles gold in Tokyo, his fifth ATP Masters 1000 crown in Cincinnati and his second Nitto ATP Finals trophy. Of his four losses during that stretch, three have come against Djokovic (1) and Medvedev (2).

The past two days have shown that when the German is firing, there are no shortcomings in his game. Zverev outplayed Djokovic from the baseline in the Nitto ATP Finals semifinals and out-served Medvedev in the title clash.

At this year's Nitto ATP Finals, he played fearless tennis and won 61 per cent of his second-serve points against the best players in the world. Entering the week, he had only won 50 per cent of points behind his second delivery on the year.

"You go into the match knowing that you're playing one of the two best players in the world. I knew that I had to play my best tennis to beat him," Zverev told atptennis.com after defeating Medvedev. "I did that. I think I played a very good match. I'm happy with my level. I'm happy with the performance I had."

Zverev lost a match in Turin this week, but that was in a final-set tie-break against Medvedev, who pushed Djokovic for year-end No. 1 this year before the 34-year-old clinched a record seventh year-end No. 1 finish during the Paris Masters. Peng Shuai Missing Case: Novak Djokovic Supports WTA’s Decision of Possible Pull Out of China After Tennis Star’s Disappearance.

But there is reason to believe next year could be an even tighter race for the top spot. Medvedev lifted his first major trophy at the US Open, defeating Djokovic in the final, and Zverev has also proven fit for the biggest matches.

In the semifinals of the Tokyo Olympics, Zverev halted Djokovic's dreams of a Golden Slam. In Turin, he faced the daunting task of playing Djokovic and Medvedev in back-to-back matches, and he passed the test with flying colours to become the fourth player in tournament history to earn semifinal and final wins over the world's top two players. He is the first to do so since 1990.

Sunday's victory also gave Zverev the most titles for anyone this year with six, and his 59 tour-level victories are currently best on Tour. The only thing the German has not accomplished is major glory, and the 2020 US Open finalist has his sights set on changing that next year. "I have succeeded on every single level, and there's one thing missing," Zverev said. "I hope I can do that next year."

(The above story first appeared on LatestLY on Nov 22, 2021 10:17 AM IST. For more news and updates on politics, world, sports, entertainment and lifestyle, log on to our website latestly.com).