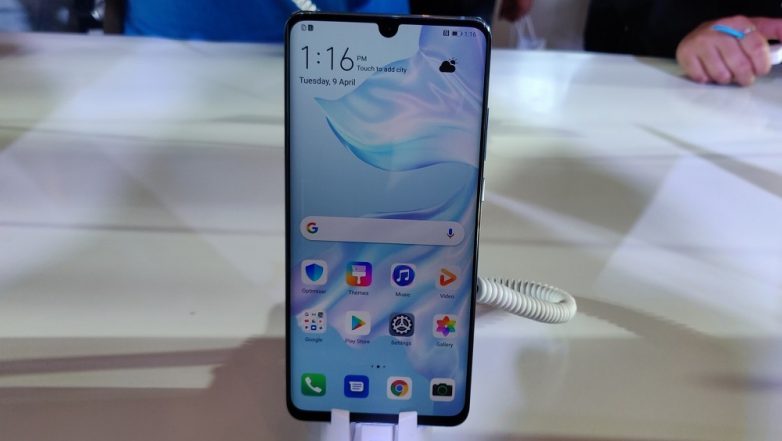 New Delhi, April 9: Aiming to disrupt the digital imaging market, premium smartphone maker Huawei on Tuesday unveiled the Huawei P30 Pro in India for Rs 71,990, featuring the worlds first RYYB sensor. The new RYYB sensor, which uses yellow sub-pixels instead of green, for the main camera replaces the RGB sensor found in most smartphones. According to Huawei, the new sensor would let in up to 40 per cent more light than an RGB sensor. Huawei P30 & P30 Pro Shines At Burj Khalifa: World's Tallest Building Lightshow Marks Arrival of Huawei P30 Series in Middle East; Watch Video.

There's a 32MP front camera for selfies. According to the company, the new lens arrangement, image signal processor (ISP) and neural processing unit (NPU) work in tandem to capture incredible photos and videos.

"India is a strategic market for us and we are committed to bring in new products to the Indian market. We recognise that consumers here are remarkably technology-savvy and therefore we continuously strive to launch the best of products for our patrons here," Pan added.

The HUAWEI P30 Pro features a FullView display that supports a resolution of up to 2340x1080 pixels with a curved screen design that uses a flexible OLED panel.

There's a 6.47-inch OLED Dewdrop display wherein the two sides of the screen naturally bend downwards towards the edge of the frame.

The phone has been created with a nine-layer nano optical colour finish and is inspired by the unique colour palette and pristine look of salt flats.

The phone also has HUAWEI SuperCool technology to improve thermal performance, thus, keeping the phone cool during heavy use.

The HUAWEI P30 Pro will be available on amazon.in starting on April 15 for Prime members and on April 16 for regular customers. Priced at Rs 71,990, the device will be available in an 8GB RAM + 256 GB ROM variant. Early buyers would get an exclusive bundle with the HUAWEI Watch GT for Rs 2,000 more.