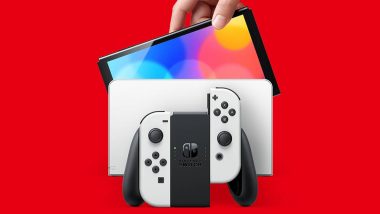 Tokyo: Japanese gaming giant Nintendo has announced a new version of the Switch console -- Nintendo Switch (OLED model) -- that features an updated display, increased storage, improved speakers and a better design. The main new feature here is the 7-inch OLED display. This is a bump up from the 6.2-inch IPS LCD on the standard model, although both feature the same 1280x720 resolution. Nintendo’s 3 Lakh Accounts Breached by Hackers Since Early April of This Year.

The OLED model also features a redesigned kickstand at the back. Unlike the small strip on the standard model, the OLED model features a wide flap that is sturdier and can be adjusted to multiple positions, GSMArena reported. Nintendo doesn't exactly mention what's changed other than stating that the audio from the bottom-firing stereo speakers is now enhanced over the standard model.

#NintendoSwitch (OLED model) offers another option for you to choose how you want to play the platform’s vast library of games. Check the website to learn more about each of the three systems and choose the right one for you. https://t.co/C3SXSj7nMY pic.twitter.com/gHv20ZclxW

The dock that comes with the OLED model has also been updated. It now includes an integrated LAN port, so you can get more reliable wired connectivity when playing in docked mode. This dock is sold separately and should be compatible with the standard model as well.

The OLED model still has the same Nvidia Tegra X1 SoC that the Switch has always had, so don't expect games to run any better here. Aside from these changes, this is still the same as the standard Switch that all of us are now familiar with, the report said. This means it supports all of the same games and accessories, and also has the same rated battery life as the standard model, it added.

(The above story first appeared on LatestLY on Jul 07, 2021 03:45 PM IST. For more news and updates on politics, world, sports, entertainment and lifestyle, log on to our website latestly.com).