OnePlus 6 'Avengers: Infinity War' Edition on the Cards as OnePlus Teams Up with Marvel 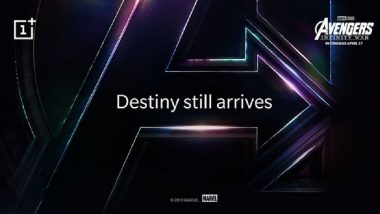 OnePlus 6 launch is expected to happen soon, and ahead of it the Chinese company on Thursday announced its partnership with Marvel Studios. The new tie-up is primarily for Avengers: Infinity War that is hitting theatres in India and the US on April 27 and extends the association between OnePlus and Walt Disney. It majorly hints the launch of an Avengers-themed OnePlus 6 that could debut around the release date of Avengers: Infinity War later this month. The official OnePlus 6 launch date has not been announced as of now. Last year, OnePlus tied up with Walt Disney Studios to launch the OnePlus 5T Star Wars Limited Edition model exclusively in India. See More: OnePlus 6 Yet Again Teased Ahead of Launch Underneath OnePlus 5T; Might Get Repositioned Alert Slider -View Pic

The company previously teased its partnership with Marvel Studios through a video which was taken down later on. The video teaser featured OnePlus and Avengers logos alongside Avengers: Infinity War poster for at least 10 seconds. However, there is no official confirmation from the company regarding the Avenger themed OnePlus 6 smartphone. However, it is rumored to introduce Avenger branding and may have some pre-loaded content specifically for the Marvel fans. As a reminder, OnePlus also offered OnePlus 5T Star Wars Limited Edition previously which was introduced in India with a price tag of Rs. 38,999. Read Also: New OnePlus 6: Render Images, Expected Prices, Release Date, Features & Specifications - All You Need to Know

Moreover, the original 5T and OnePlus 5T Star Wars Special Edition were totally identical in terms of specifications not featuring any noticeable changes. Similarly, the Avengers-themed OnePlus 6 model is expected to be identical to the original OnePlus 6 model. Considering the leaked details and rumors, the main underlines of the upcoming flagship device will be notch display, Snapdragon 845 SoC, dual rear camera setup, up to 256GB of internal storage, water-resistant build, Alert Slider and much more.

(The above story first appeared on LatestLY on Apr 19, 2018 03:44 PM IST. For more news and updates on politics, world, sports, entertainment and lifestyle, log on to our website latestly.com).