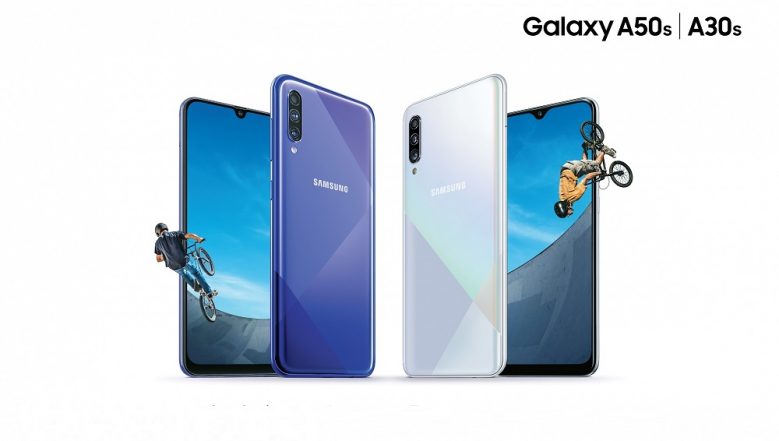 New Delhi, Sep 11: South Korean tech giant Samsung on Wednesday launched two new smartphones Galaxy A50s and Galaxy A30s with triple camera system in India. The new smartphones are the upgraded versions of the Galaxy A50 and Galaxy A30 that were launched in India earlier this year. The Galaxy A50s is to be priced at Rs 24,999 for 6/128GB and Rs 22,999 for 4/128GB RAM and memory variants. Whereas, the Galaxy A30s will be available for Rs 16,999 for 4/64GB variant. The devices will be available starting September 11, across offline channel, Samsung Opera House, Samsung e-shop and leading online portals. Samsung Galaxy A50s To Be Launched in India on September 11.

"Our coolest new Galaxy A50s and A30s have been designed to elevate the smartphone experience of young millennials and Gen Z to the next level as they are equipped with premium features such as Night Mode, Super Steady video and Samsung pay," said Ranjivjit Singh, Senior Vice President and Head of Marketing, Mobile Business, Samsung India in a statement.

All you need to tell your life’s stories, and a whole lot more. Presenting the all-new Samsung Galaxy A series with super steady and night mode. Designed to awaken the storyteller in all of us. #GalaxyA50s #GalaxyA30s Know more: https://t.co/wDVF4cwKne pic.twitter.com/NigPw3jDDy

The Galaxy A30s has a 6.4-inch HD+ Infinity-V Super AMOLED display with a resolution of 1560 x 720 pixel. The device is powered by an octa-core Exynos 7904 processor and also comes with the AI powered Game Booster technology, Knox Security and Samsung Pay.

The device houses a 4000mAh battery with 15W fast charging and runs on Android 9.0 Pie OS out-of-the-box. In terms of optics, the device features a triple rear camera setup with 25MP as a primary sensor with LED flash, a 5MP depth sensor and an 8MP. For the front, the phone carries a 16MP sensor shooter.