Samsung is set to launch its next premium flagship S22 series on February 9 and now ahead of official announcement, the key specifications of the series have been revealed online. 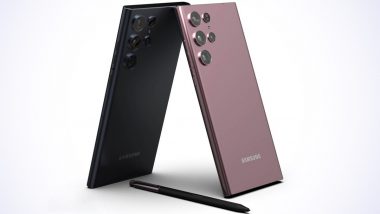 Seoul: Samsung is set to launch its next premium flagship S22 series on February 9 and now ahead of official announcement, the key specifications of the series have been revealed online. The standard Galaxy S22 will have a 6.1-inch display. The Galaxy S22+, meanwhile, will have a 6.6-inch panel, reports 9To5Google. Samsung Galaxy Unpacked Event To Take Place on February 9.

Instead of a primary 12MP camera yet again, the S22 and S22+ are both expected to have a 50MP Samsung GN5 sensor for the primary camera. Meanwhile, it's rumoured the same 10MP selfie camera will still be in use.

Under the hood, the Galaxy S22, S22+, and the S22 Ultra are all expected to carry one of two processors. Samsung's in-house Exynos 2200 chip could power the Galaxy S22 series in some regions. Samsung generally uses Snapdragon in the US, but Exynos in many international markets.

The Galaxy S22 Ultra will feature a Super Clear lens for its main 108MP camera. New lens should provide reduced glare and reflections as well as allow the sensor to resolve more detail. The Galaxy S22 Ultra will be also better at stabilising videos. An AI-assisted Wide Shift OIS feature will help in achieving better stabilisation of videos, effectively reducing camera shake by four times when compared to the S21 Ultra.

(The above story first appeared on LatestLY on Jan 27, 2022 02:33 PM IST. For more news and updates on politics, world, sports, entertainment and lifestyle, log on to our website latestly.com).