Species named Roridomyces phyllostachydis was discovered during a mushroom documentation project in the North East. The project was undertaken in the months of monsoon in Assam by a team of scientists from India and China. Let us understand more about these light emitting or bioluminescent mushrooms. 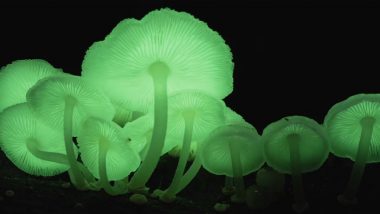 A new variety of mushrooms have been discovered in the forests of Northeast India. What makes it an interesting find is that the mushrooms are bioluminescent, or they can emit light. The species is named Roridomyces phyllostachydis and was discovered during a mushroom documentation project in the North East. The project was undertaken in the months of monsoon in Assam by a team of scientists from India and China. Let us understand more about these light emitting or bioluminescent mushrooms. 'Mushroom Medley,' Old Pic of Colourful Mushrooms by Photographer Jill Bliss Resurfaces Online! Check Out More Photos of the Vibrant Arrangements.

The locals called these fungi species as "electric mushrooms." These mushrooms were first seen in August near a stream in Mawlynnong in East Khasi Hills district and later at the Krang Shuri waterfalls. Present in the bamboo forests in the West Jaintia Hills District in Meghalaya, this fungus emits its own light which is called bioluminescence. This new fungi is now among 97 species of bioluminescent mushrooms in the world. They were found growing on dead bamboo, which requires more research. The team had Steve Axford, a fungi photographer who made a video of the growing and glowing of mushrooms here. Sea Waves Sparkles in Blue at Night: Scientists Explain How Dinoflagellates When 'Squeezed Tight' Cause Bioluminescent Light Waves on the Seashore.

Here's Video of The Glowing Mushrooms in Meghalaya:

Watch Another Video of Glowing Mushrooms in North East India:

How Do These Mushrooms Glow?

The mushrooms have a bioluminescence property to produce and emit light. These mushrooms have an enzyme called luciferase which emits light in presence of oxygen. "During the chemical reaction, several unstable intermediate products are released as excess energy that makes them visible as light," explained Samantha Karunarathna, mycologist from the Kunming Institute of Botany, Chinese Academy of Sciences, a lead author of the paper. The team noticed that only the stalks of the mushroom lit up which made it a new species. It belonged to the genus Roridomyces—and the first fungus in this genus to be discovered from India. One of the unique mushrooms that grow in India's Northern state of Jammu and Kashmir are the morel mushrooms.

This finding is important as only a few species of flowing fungi are reported from India. There are two in Western Ghats and one in Eastern Ghats. There have been some spottings of glowing fungi in Maharashtra and Goa. The team believes there could be more but they have not been documented.

(The above story first appeared on LatestLY on Nov 22, 2020 12:16 PM IST. For more news and updates on politics, world, sports, entertainment and lifestyle, log on to our website latestly.com).